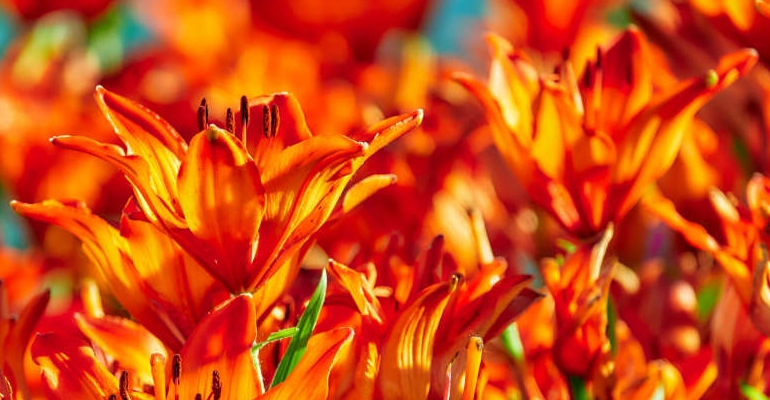 Sultry and captivating; lilies have graced our homes and gardens since ancient times, writes Flo Whitaker

If you’re new to lilies, start with ‘Asiatic’ types. Easy to grow; they are robust and reliable performers, even in cool, damp summers. Reaching approximately 90cms high and typically flowering in June to July, most have little or no scent, but their bold-coloured trumpets pack a visual punch. ‘Oriental’ varieties are similar, but highly fragranced and tend to bloom later, usefully giving a display during August.

Lilium Regale also has an easy-going nature, plus a strong, heady fragrance, particularly at dusk. Regale enjoys life in sun or light shade and is unfussy about soil type.

Sweetscented Lilium candidum has been prized by gardeners for thousands of years. Early Christianity was quick to adopt its ethereal blooms as a symbol of The Virgin Mary. Names such as ‘Madonna Lily’ and ‘Annunciation Lily’ have accompanied this time-travelling flower through the centuries. While many lilies prefer sunshine and deep-ish planting, (15cms) in humus-rich soil, candidum favours shallower planting, (8 - 10cms), copes in poorer soils and enjoys light shade.

Tree lilies are skyscraper giants, rocketing 2 - 3 metres high. They need humusrich, acidic soil in a border – definitely unsuitable for patio pots! My favourite lilies are the ‘Martagon’ types, with their magical candelabra tiers of turban-like flowers. Martagon’s are perfect for semi-shade and reach approximately 1.5 metres high. They prefer alkaline soil and, given time, can make long-lived colonies.

Lily bulbs are curiously strange; comprised of fleshy ‘scales’ arranged in a circular formation. Each scale can potentially break away from the parent bulb and form a new plant. Very clever – but there’s a design flaw. Excess rainwater may become trapped between the scales, causing the bulbs to rot. Juvenile bulblets take years to reach flowering size, which is why mature bulbs are expensive, so give them the best conditions possible by adding horticultural grit to the bottom of the planting holes. Some gardeners advocate completely burying them under mounds of grit. This has an additional advantage as the grit usefully indicates their position when digging in a border. Dormant bulbs are difficult to spot and are easily damaged by a wayward spade.

Potted lilies are seldom troubled by poor drainage – wind rock is their biggest challenge. This can be overcome by using good-sized pots and soil-based compost, (avoid lightweight general potting mix.) Add plenty of grit for drainage – and weight. If the pot is permanently sited, a couple of old house bricks buried at the base adds anchorage. 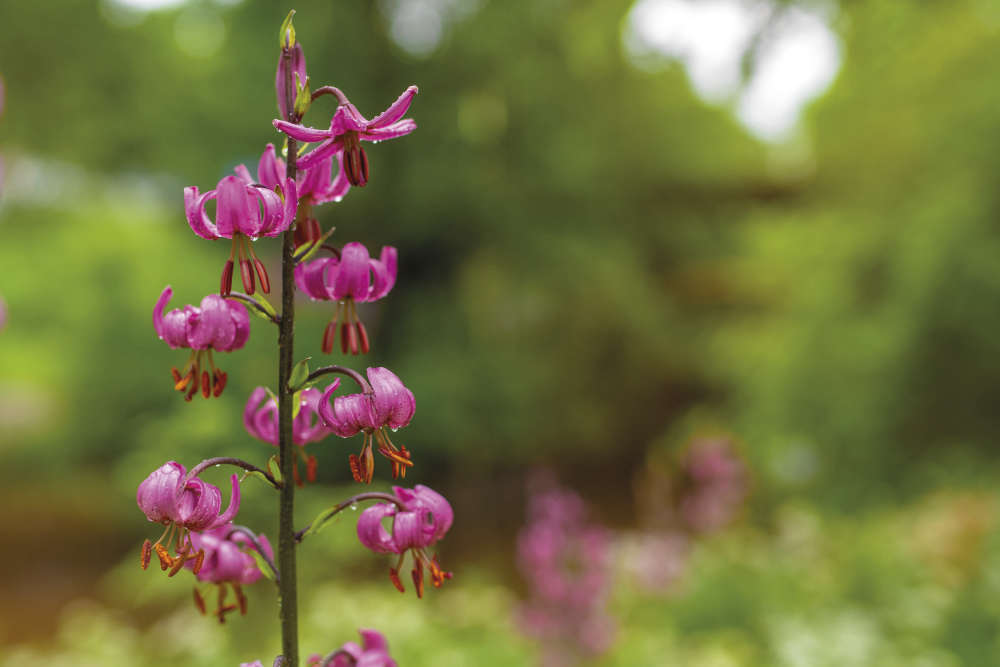 All parts of a lily are poisonous. Wash your hands after handling them and consider pet safety. Cats are fastidious groomers, which makes them particularly vulnerable – if pollen gets onto their coats, they will attempt to lick it off.

Lilies can suffer from pests/diseases. Slugs and snails munch on them, but, in most circumstances, the damage is purely cosmetic. Fungal infections, (Botrytis) may appear as chocolate coloured blotches on the foliage. Pick off affected leaves and dispose in the bin, not the compost heap, as fungal spores may contaminate other plants – but don’t panic. Spores of every type are naturally present in the environment and a significant outbreak of lily fungus is rare.

More serious is virus disease, which gives plants a yellowed, sickly appearance and also causes deformed buds and leaves. Sadly, there is no cure – bulbs should be dug up and discarded. Tulips and lilies can be affected by the same virus strains. If you grow lots of tulips, be extra-vigilant.

Lily beetles wear swanky, military style red and black outfits. They first appeared in the UK in the early 20th century – probably hitching a ride from the Mediterranean. Once considered a minor pest, their population has exploded during the last 30 years. Our warming climate seems to suit them. Understanding their life cycle is essential to their control – remember, they have no natural predators here. You can find lily beetles anywhere in the garden. They seem to favour tall-stemmed plants and I’ve noticed them on allium, crocosmia, iris and suchlike, but they feed and reproduce exclusively on lilies. From early spring, adult beetles emerge after a winter hibernation under leaves or loose soil. They lay small orangey/brown eggs on the undersides of lily leaves. The larvae emerge and start munching; covering themselves with their excrement as a protection from predators and desiccating sun. The grubs then burrow underground, where they pupate, emerging as adult beetles.

‘Bug Killer’ sprays are not particularly effective – or desirable. The best method is to pick off the beetles and squash them underfoot. Try not to cast a shadow, otherwise the beetles will quickly jump and lie upside-down on the soil with their black undersides creating perfect camouflage – they’re smart! When dealing with the disgusting poo coated grubs, a hosepipe is your ally. The vulnerable grubs can only survive on lilies and a strong jet of water will rinse off their protective coatings and knock them onto the ground. Fritillaries are also members of the lily family – remember to check them when on ‘Beetle Patrol’.

Beetles find their host plant by scent, so grow lilies surrounded by an assortment of other things to mask their aroma. Also, ensure they have  sufficient nutrients to grow well, as weak, struggling plants produce stress hormones that attract predators. Oriental lily, ‘Pink Defender’ claims to be unpalatable to beetles. I’ve not grown it myself, so can’t comment, but, if you’re plagued with the pest, it’s doubtless worth considering. 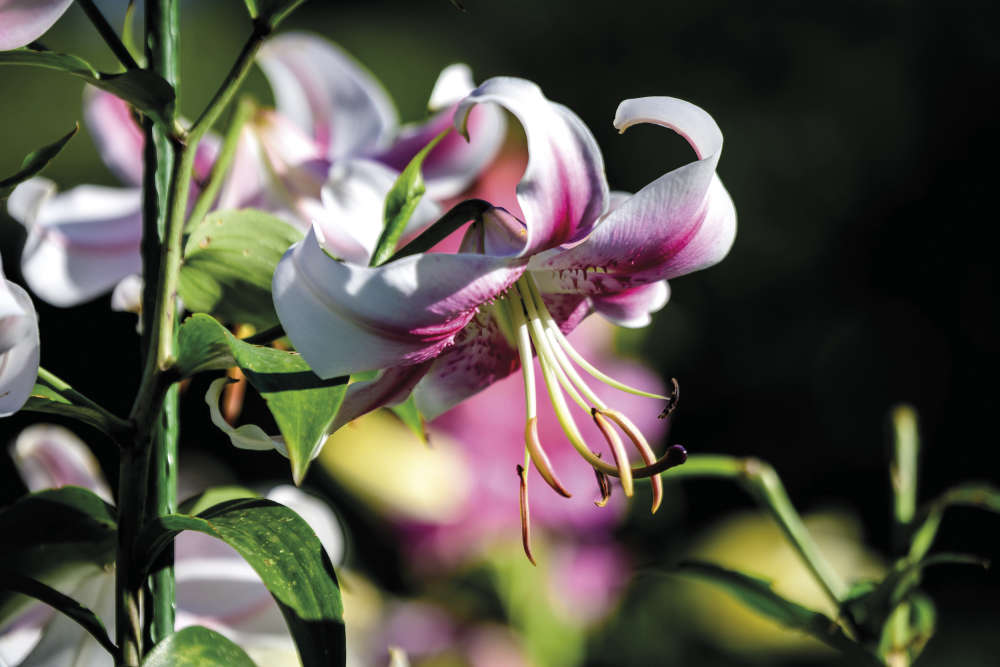