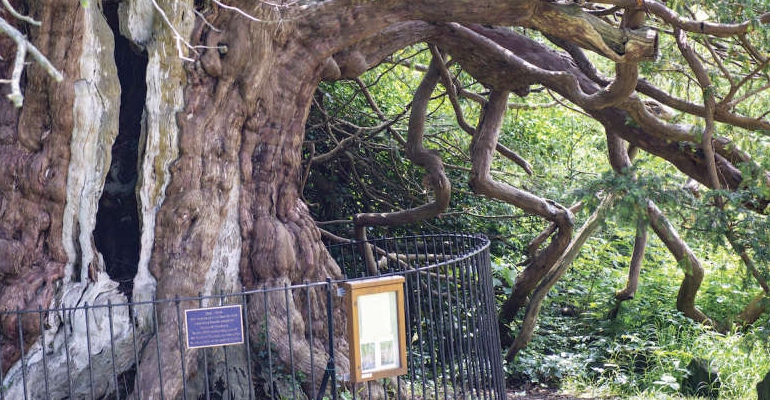 Truly ‘yew-nique’; the yew is unlike any other tree. It’s a conifer, yet produces no cones or needle; and it can, potentially, live forever. Some of the world’s oldest yews grow in the British Isles. Flo Whitaker visits an old friend and imagines its life story – so far…

It is 1,000 BC. You have just germinated from a seed that was probably deposited by a scavenging bird. A tiny 2 cm high emerald green shoot is the only sign of your presence above ground, but you are busily developing anchoring and feeding roots, threading through the damp soil of the forest floor. A good root system cannot be rushed and you’re in no hurry. Your teenage years are spent looking gangly and awkward, but something changes as you reach your 30’s. You start developing a characterful, rugged appearance. The weather is bending and shaping you – it will continue to do so for the rest of your life. 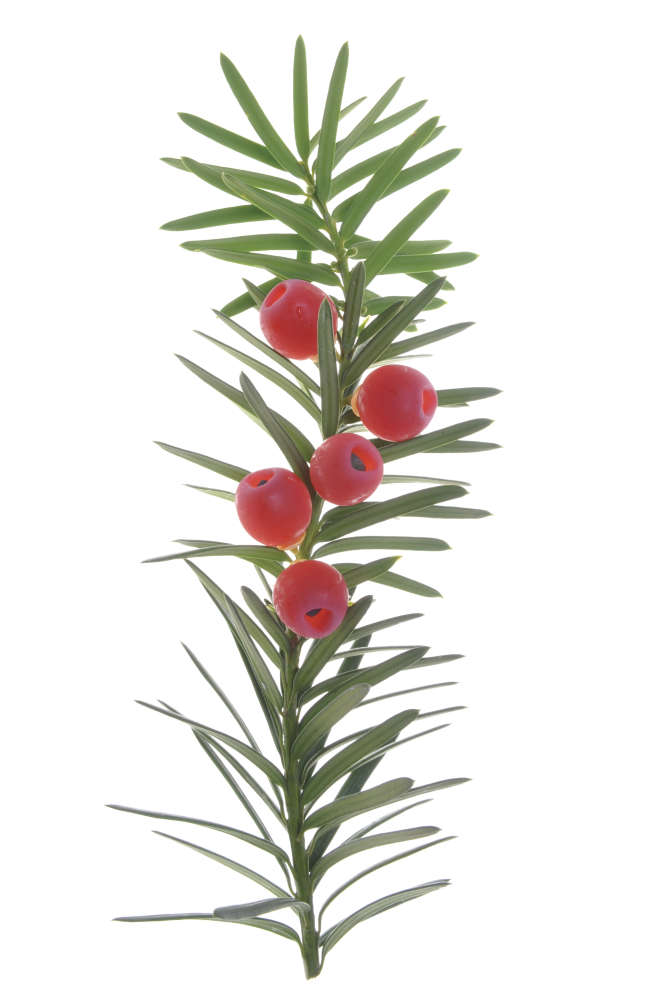 By your 100th birthday, you are becoming a feature in the landscape. Future archaeologists will name this period Late Bronze Age, but, of course, a passing Bronze Age hunter doesn’t know his time is almost up. He’s just grateful to take shelter from a sudden downpour under your evergreen canopy. As he waits for the rain to pass, perhaps he selects a branch to carve into something useful. Yew wood is hard and close-grained – perfect material for tools and weapons, but he’s unlikely to choose your timber for cooking utensils. Although your red fleshy berries are fruity and succulent – beware! The black seeds within are extremely toxic and every other part of you is poisonous. A handful of ingested leaves can kill a person, yet, come the modern 21st century era, your foliage will be used to develop life-saving, cancer medication. Such is your character; yews are contrary, perverse and reject all rules.

As our Bronze Age acquaintance departs, to be replaced by hi-tech Iron Age yuppies, you flourish; extending your limbs, which have the curious ability to take root wherever they touch the ground. This allows you to make identically cloned copies of yourself and, potentially, live forever. By this method, a single tree can ‘walk’; eventually making a grove of yews with fused and tangled trunks. That’s one reason why it’s impossible to precisely calculate your age. Where does one tree end and another begin? You remain silent on the matter; like an old Hollywood star, ignoring intrusive, age related questions. However, one personal detail soon becomes a matter for concern – your weight.

Around the time of your 800th birthday, you settle into comfy middle age and your girth spreads. In stormy conditions, young, flexi-limbed trees bend in the wind, but mature trees, with their rigidity and wind-resisting bulk, may topple. So, with the help of beneficial fungi, you start dieting. Bizarrely, the life-giving outer layers of your timber remain perfectly healthy, while, simultaneously, fungi work away, rotting out your interior. This drastically reduces your weight and wind resistance. Most hollow yews are healthy and stable. 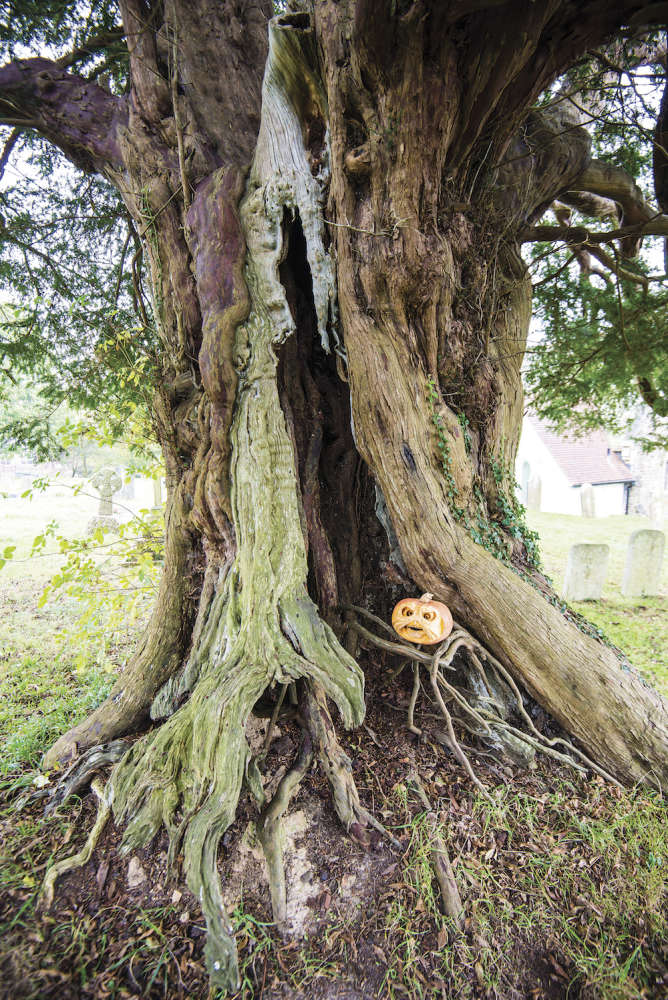 A tree’s age can be estimated by counting growth rings, but, of course, this method is useless if areas of trunk have rotted away. Perhaps the inscrutable yew deliberately become hollow, just to annoy us? I wouldn’t be in the least surprised. You choose not to elaborate – but keep on growing.

Evergreen plants, with their eternal life-giving themes, are particularly revered in Druidic worship. Pre-Christian shrines, wells and cemeteries were centred around old yews and it’s reasonable to assume that yews were deliberately planted when new sites were developed. Nowadays, most ancient yews are found within churchyards. Many grow on elevated areas of ground, begging the question, “What’s the tree sitting on?” Ancient graves, or foundations of pre- Christian temples, perhaps?

The next few hundred years are a busy time. You notice a change in people; their clothing, accents and customs. Farming practises enter a new era; the notion of a permanent homestead emerges as the old hunter- gather ways decline. Strange people from a far-flung place called Italy arrive – then mostly leave again after a few hundred years. But aspects of their culture remain because they incorporate yew into their rituals. Yew boughs replace Italian cypress for funeral wreaths and temple decorations. You’re in demand – and you keep growing.

Silent and enigmatic; you see everything from your vantage point by the cemetery gate. You’re a huge tree now; noted throughout the region. Then, the landscape changes again. Roman-style temples fall into disuse; their materials repurposed for new religious buildings. There’s a new kid in town – they call him Jesus. Centuries pass. Viking raiders come by, but don’t linger. They have their minds on bigger prizes. 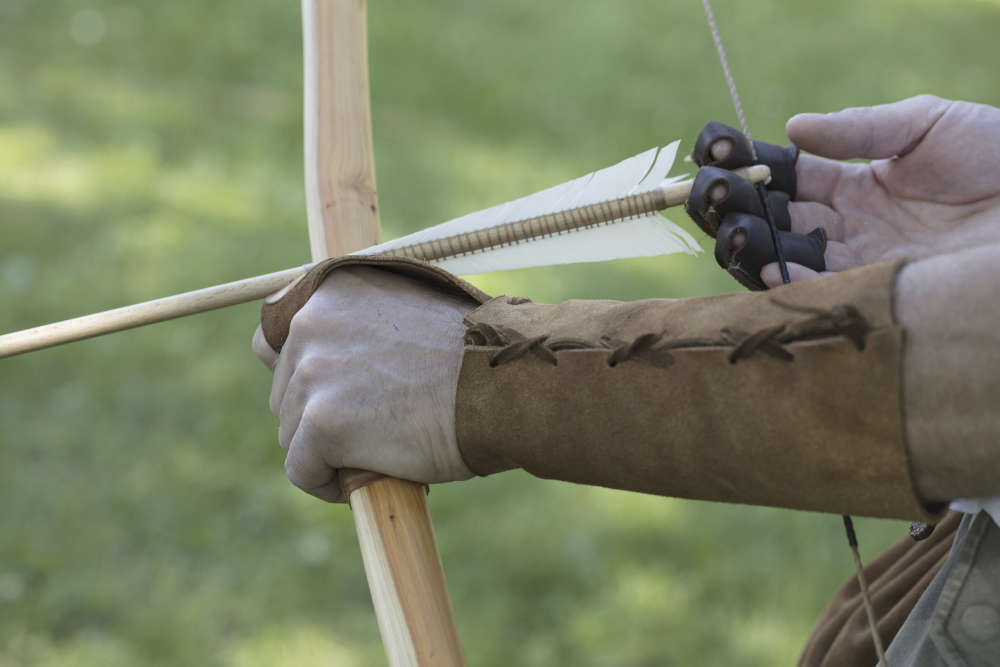 Medieval people recognise your importance, but also view you with suspicion. They call you, ‘The Devil’s Tree’, on account of your distinct reddish heartwood and that, when wounded, your angry sap can bleed red. They note how your bark and roots make grotesque swirling patterns that resemble demonic faces, and how your wood burns with immense heat and ferocity – like the flames of hell. The invention of the longbow, the Medieval Exocet missile, changed warfare utterly. Vast yew forests are felled for longbow timber, but more is required, so yew wood is imported from Spain. Ironically, these longbows are later used against the Spanish Armada. Somehow you escape the yew cull – and keep on growing.

Fasten your seatbelt as we go hurtling through time. It’s 31st October AD 2021. Halloween, All Saints’ Night, All Souls’ Eve, All Hallows – it has so many names. You’re truly ancient now, but are still a forceful presence to be reckoned with. You thought you spied a witch earlier, but it was just a young girl in fancy-dress. Her father was carrying a pumpkin; a peculiar, modern vegetable. Pumpkins only arrived here about 400 years ago – you wonder if they’ll catch on?

A woman approaches. “Hello”, she says, as she studies you intently, scribbles in a notebook, then produces a camera. You shake the dust from your branches and stand proud – you’re having your photograph taken and want to look your best. The woman says, “Cheerio. I’ll come again next year.” That’ll be nice, you think. A visitor. Something to look forward to. After all, what’s a year to a yew tree – it’s just the blinking of an eye. Dusk is falling. Another day ends. You keep on growing... 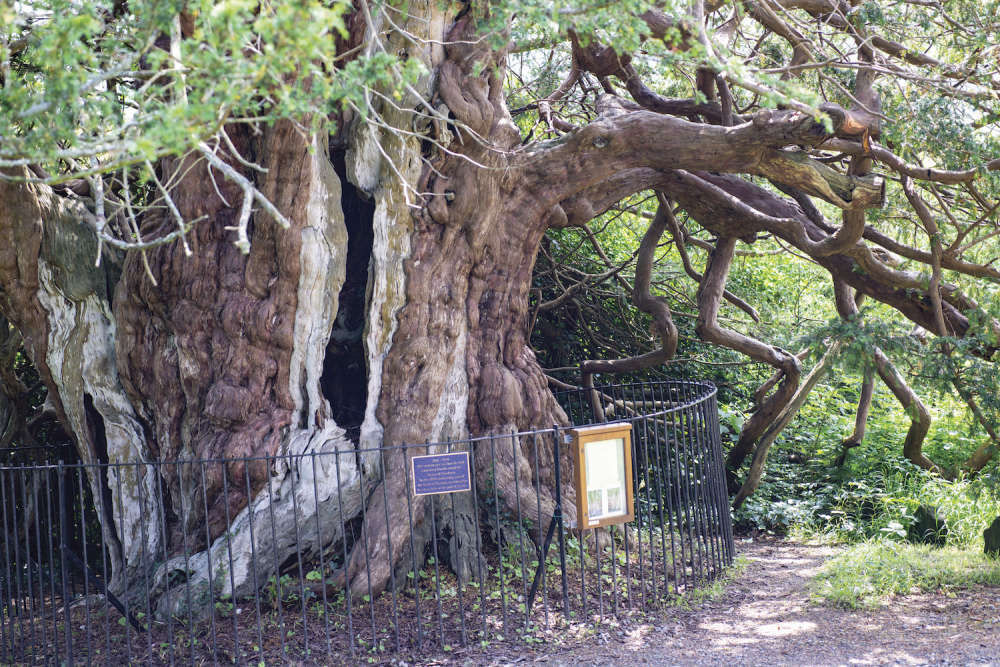