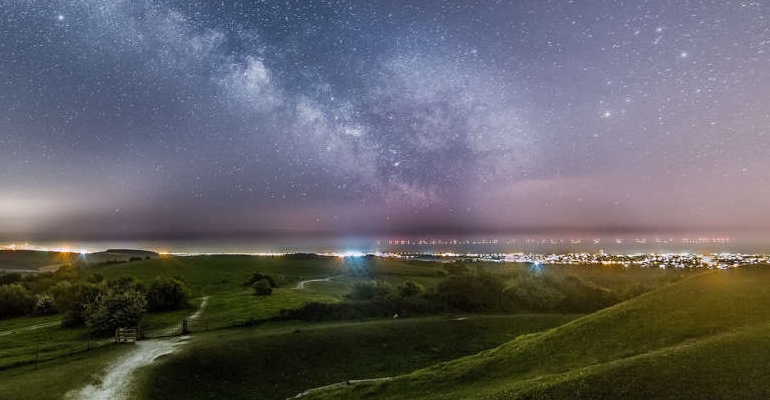 If you can remember ‘twinkle twinkle little star’ from childhood, looking up at the sky at night with a sense of awe and wonder then that sense of being starstruck will always be there, as Robert Veitch discovered when his lucky star led him to an expert

Sandra Voss is Science Director at The Observatory Science Centre, having worked there since 2003. Her physiology PhD is from the Royal Veterinary College. “Years ago, I came here with my husband, we picked up a leaflet for a ‘Beginners Astronomy Course’ and decided to do it together. In 2003, National Astronomy Week promoted a close approach of Mars and I took a part-time job here. One thing led to another, and now I’m Science Director. I eventually did my Astronomy GCSE,” she revealed with a grin.

Sandra’s story proved astronomy can be a viable career change, and she also believes it’s a great career for schoolchildren with a mathematical or scientific inclination. “We have some super well qualified people with astrophysics degrees working here.”

Astronomy is a discipline where amateur contributions help the professionals. “Amateurs can spend vast amounts of time studying the skies and they are a greatly valued asset,” she revealed. It’s akin to an armchair viewer being able to help Lewis Hamilton’s F1 car go that bit faster. 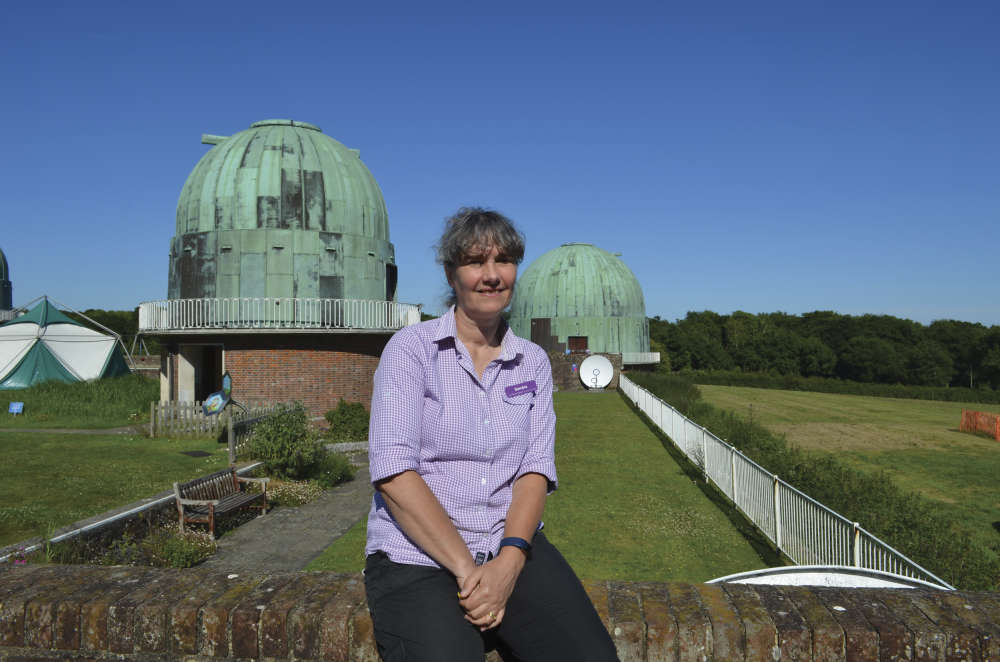 The development of astronomy was rooted in practical necessity. It was Charles II who commissioned the construction of the Royal Observatory Greenwich in 1675. Located on the Prime Meridian it divides the world into eastern and western hemispheres, and is the place where Greenwich Mean Time (GMT) originated.

The purpose of the observatory was simple, to map the stars more accurately and help shipping navigate at night and when out of sight of land, ultimately to reduce shipwrecks. When star charts were coupled with accurate maritime timepieces linked to GMT, it was possible for ships to locate themselves exactly. As a result, the number of shipwrecks drastically reduced.

John Harrison, a marine chronometer, developed the first accurate maritime timepieces and it was Harrison’s ‘lesser watch’ that made the Trotter brothers, millionaires in the Only Fools and Horses episode Time on our Hands.

Over time, the study of the stars became a scientific endeavour that is still searching for the answer to how it all began as well as fulfilling humankind’s innate inclination to explore the heavens above us... think one small step in 1969 and return to the moon in 2025.

Sandra picked up the story. “After WWII it was decided to move from Greenwich, due to increasing light pollution and magnetic interference from the electrification of London’s railways.”

Over 70 sites were investigated, before the Royal Greenwich Observatory, Herstmonceux opened in 1957. The six telescopes that were transported from Greenwich became known as the ‘Equatorial Group’ and included the astronomically famous Yapp telescope.

Trees were planted during construction to screen the observatory from the village, and because trees limited ground level heat haze and kept ground temperature more even. The walls were finished with knapped flint to maintain congruity with their surroundings. A 90-year old stonemason from Lewes had to be coaxed out of retirement to undertake the work.

In 1967 the Queen opened the Isaac Newton Telescope, which was the biggest in Britain at the time. “Low altitude and mist rolling in from the Pevensey Levels made observations difficult,” said Sandra. In 1979 it was moved to a much higher altitude at the Roque de Los Muchachos Observatory on the Canary Island of La Palma. 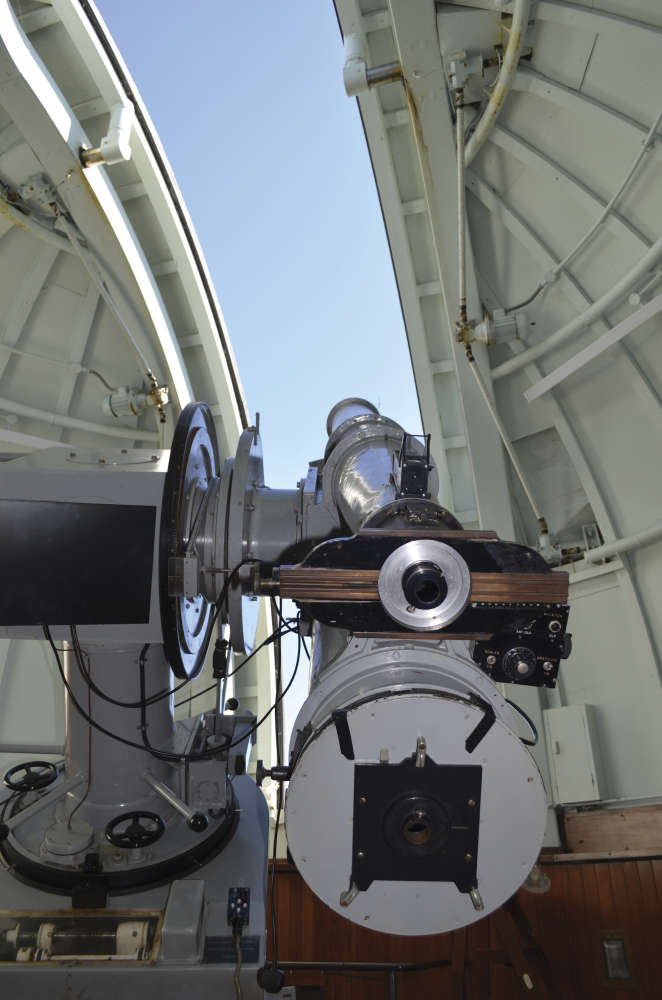 Cold nights on the edge of the marsh had to be endured, because heating the domes meant the warm air would rise and blur the photographs. At its peak, over 200 people worked at the Royal Greenwich Observatory, Herstmonceux.

In 1990 the observatory moved from Sussex to Cambridge and five years later The Observatory Science Centre opened, under the stewardship of the charity, Science Projects. It runs as an education centre and as a tourist attraction, assisted with Lottery funding. Sandra’s passion for astronomy is evident from the way she spoke so enthusiastically about it, “I always get a ‘wow’ when I look up on a clear night.”

She was keen to point out that seeing a shooting star is potluck. “A shooting star is generated by heat, caused when a meteor is captured by the earth’s atmosphere – It’s like putting your finger over a bicycle pump – The air pressure generates friction then heat, which generates ablation, which creates the white contrail behind the meteor.” The part of a meteor that survives the impact with earth becomes a meteorite.

Sandra told me the International Space Station is sometimes visible on a clear night. “It can take up to six minutes to move from one horizon to another, depending on where it is. It shines so brightly, find its course at www.heavens-above.com”

“The Andromeda galaxy is visible during August,” revealed Sandra, “rising over the eastern horizon just after sunset. It’s the furthest and oldest thing you can see with unaided eye. It’s 2.5 million lightyears away.” That’s 15 trillion (1012) nautical miles if you like an 18th century shipping analogy. “The universe is estimated to be 13.6 billion years old,” added Sandra, at which point I stopped fretting about the length of the queue at the traffic lights earlier that day.

Earth bound telescopes have to deal with atmospheric conditions, but telescopes in space are a completely different proposition.

When the Hubble Space Telescope became operational in 1993 its images helped redefine our view of our interstellar neighbours and ourselves. Though it could see back to the early days of the Universe – about 500 million years after it formed – it’s about to be put in the shade by the James Webb Telescope.

Launched on Christmas Day 2021, its mirror has six times the surface area of Hubble and can detect images 100 times fainter. It’s currently ‘parked’ in a halo orbit at L2 La Grange point, 930,000 miles from earth, beyond the far side of the Moon. The first images were released just before we went to press. “These images will knock Hubble for six, maybe more,” enthused Sandra. It might help confirm if somewhere out there, someone is running Tik Tok or an Instagram account from a very, very distant planet. 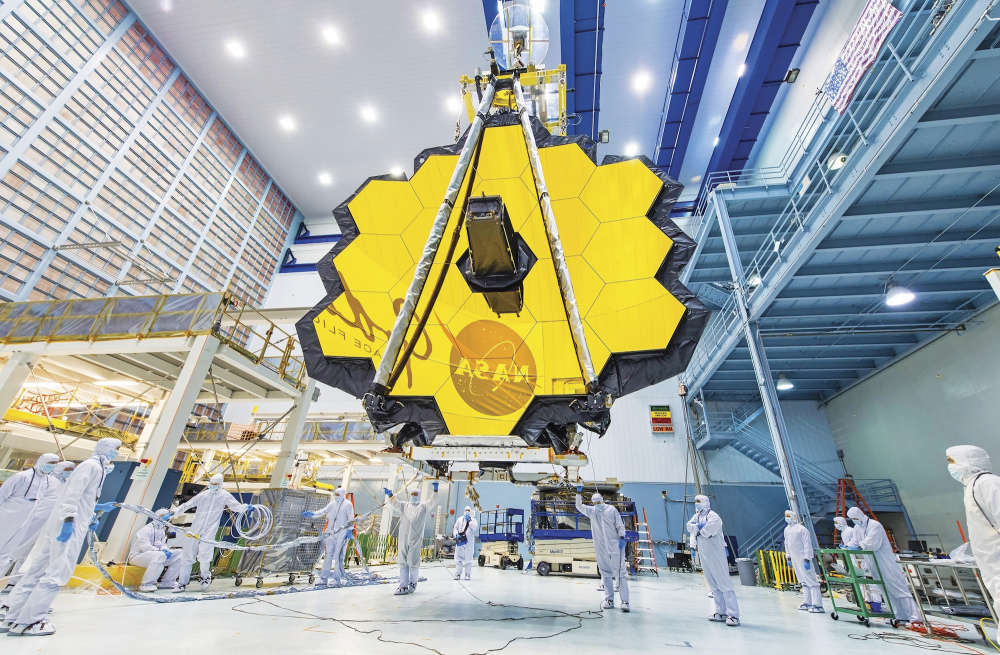 There are three working historic telescopes at Herstmonceux. As Sandra opened the shutters of Dome D for me, I couldn’t help but stare into space and think, is there anybody out there? Beneath it was the 13-inch Astrographic Refractor, an early photographic telescope that helped locate 179,000 stars between 1892 and 1905. Across in Dome E, I saw the large Thompson 26-inch Refracting Telescope, which has taken over 60,000 photographs during its working life.

“Start thinking about our Milky Way,” effused Sandra. “Up to 400 billion stars, 2 trillion galaxies; it is awe inspiring to contemplate what is going on. What is up there, and who is out there?” The Star Wars crawl – A long time ago in a galaxy far, far away, suddenly seemed more than a little inconsequential. Reality is more powerful than you can possibly imagine!

Sandra’s top tips to take stargazing to the next level

What to see this month 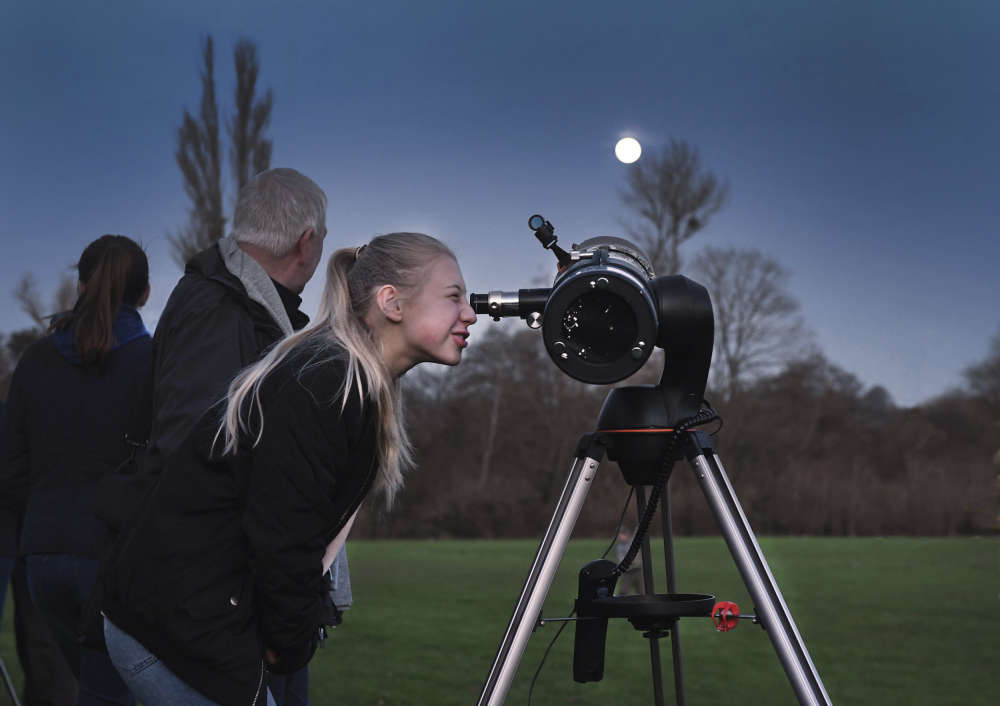