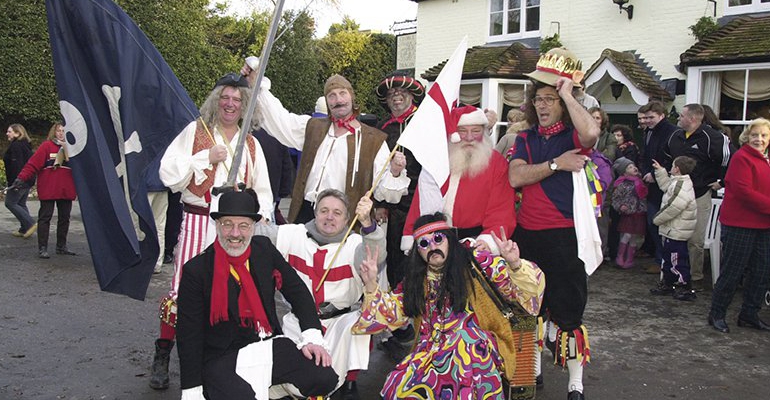 Keeping the tradition of Mumming, or Tipteering alive for all to enjoy, Peter d’Aguilar met some of the performers behind the plays

There is something disarmingly English about the long-standing tradition of the Mummers Play. Keeping alive a centuries-old custom, groups of vividly-costumed mummers visit village pubs around Christmastime, to perform to the often-unsuspecting patrons a humorous drama of death and redemption that traces its origins back to the time of the medieval mystery plays.

The play’s theme revolves around a fight to the death between St George and a Turkish knight, or occasionally the legendary dragon. While there are many regional variations in the plot and characters, the classic storyline is that, after St George has slain his foe in mortal combat, a doctor with a magic potion brings the dead Turkish knight back to life.

Other characters include Father Christmas, the Fool (or Little Johnny Jack) and Beelzebub (or Little Devil Doubt). This colourful folk play may well have evolved from pre-Christian fertility rites or pagan rituals that symbolise the seasonal cycle of death and rebirth, and the struggle of good against evil. The original mummers were often farm labourers in search of extra income from local landowners around Christmastime when work was scarce.

As the word mummer may originate from mommo – the Greek for mask – it is also conceivable that some of the early players used their masks and costumes as cover for nefarious activities. The word mummer may also derive from Middle English ‘mum’ (silent), but is more likely to be associated with Early New High German ‘mummer’ (disguised person).

Mummers often have close associations with the equally quintessential English pastime of Morris Dancing. Keeping the tradition alive in Sussex are two of the county’s most eminent mumming troupes – the Sompting Mummers and the ‘World Famous’ Ashdown Mummers. Paul Carey has been a member of Ashdown Mummers for six years and, in line with the current trend towards gender fluidity, is switches roles for Yuletide performances, from the King of Egypt’s Daughter to Beelzebub – who, besides scaring the audience, has the task of collecting donations from the audience at the end of the performance.

“Last year we raised several hundred pounds for local children’s charities,” says Paul. “Alongside this, the main objective is to have fun, drink beer and keep the mummers’ tradition alive. We are all getting older – at 63 I’m about the youngest – so we’re always on the lookout for new blood.”

Adrian Norman is one of the two original members, dating back to 1973, when he and a group of school friends decided to revive the tradition. “It was originally intended as a one off, but we haven’t missed a year since then,” says Adrian, who now plays the Doctor, but has filled all the different roles in his time. “These days, I can recite the whole play verbatim. My ambition is to make it to our 50th set of performances in 2022.”

And the ‘World Famous’ epithet? Well, that title was bestowed upon them by Lothians Morris during a tour of the Scottish Borders in 1983. Since then, they have been spotted on Turkish television when they appeared on Sky TV and featured on Have I Got News for You and two national newspapers.

Sompting Mummers (or alternatively Tipteerers) also have their roots in Morris Dancing. Glynn Hugh Jones is currently captain of the group and has been a stalwart for the past twenty years. “We work from an original script called The Steyning Play,” he explains. “While we generally stick closely to the text, we do allow ourselves the luxury of some topical ad-libbing and have recently added the explosive character of Guy Fawkes to our cast.” 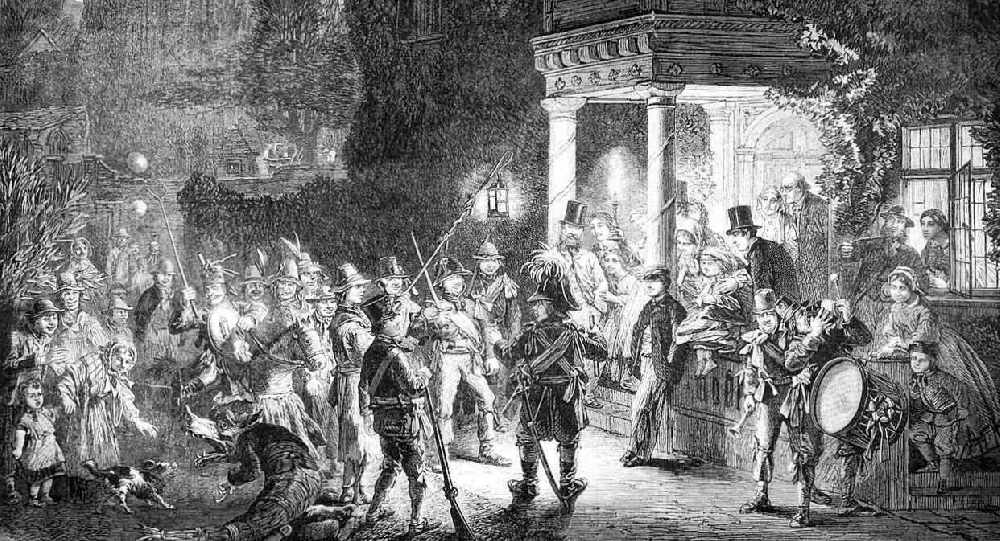