If you're lucky enough to witness a Wall of Death show you'll know the intoxicating mixture of wonder and terror as heart-stopping stunts are performed under your nose. Sara Whatley met with Jake Messham, a star rider and motorcycle trickster.

This is one of the most extraordinary spectacles I have ever witnessed; I was looking down from the top of a 20 foot high wooden drum, uttering expletives under my breath as a motorbike rode vertically round in circles, the rider dipping and diving, scraping dangerously close to the cable at the top and performing death-defying tricks as he went; no hands, side-saddle, legs over the handlebars kind of thing. It should not be possible, but with a cunning mixture of friction and centrifugal force it very much is. 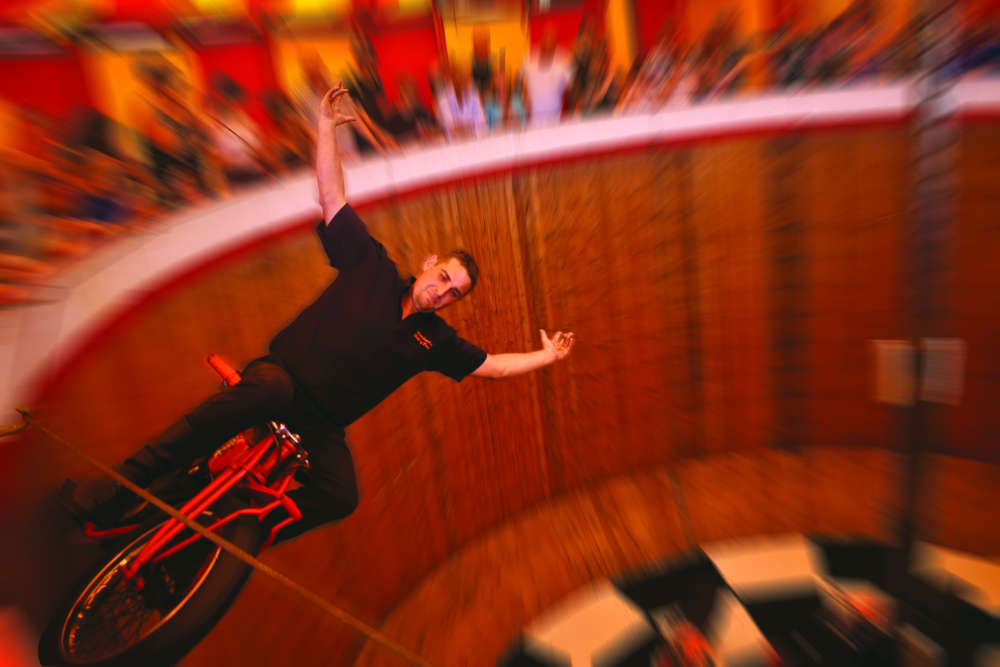 Jake Messham is fourth generation to ride The Wall Of Death and his boys will be the fifth. “My two younger brothers will be the next – they are nearly on the wall – they just need a bit more practice,” he said. 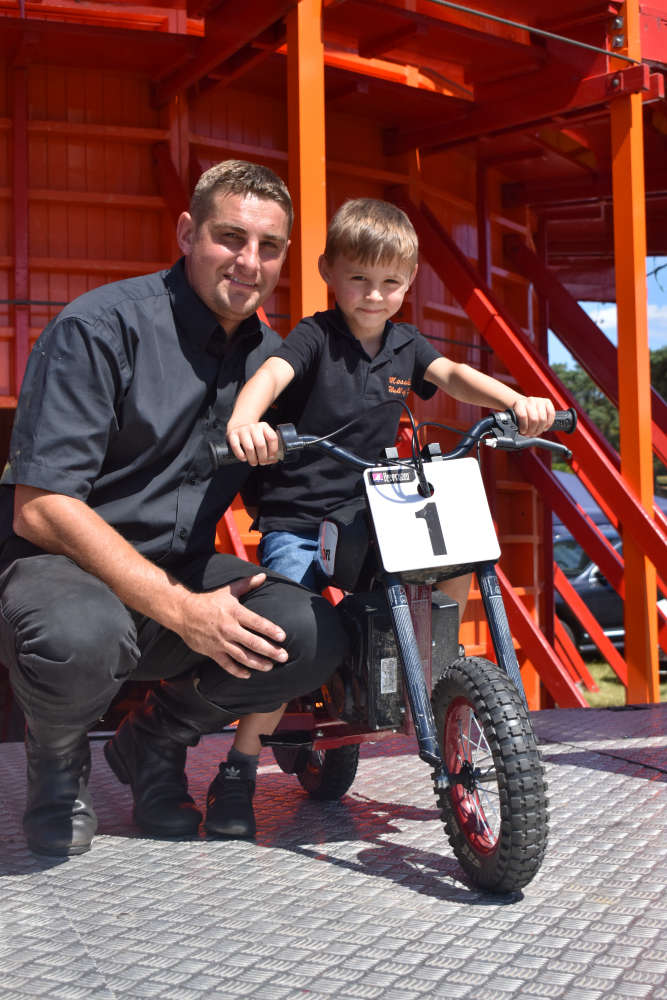 Jake and his wife, Carly have two young sons, Maddox and Greyson, who is five. Part of the show I saw included Greyson riding his little Indian bike around the lower ramped section of the wall, but if his bike battery was fully charged, his parents said he would be right up there. “What are you gonna’ be when you’re older?” his dad asked him. “Wall of death rider,” he answered, looking gleefully thrilled and desperate to get on that wall.

We stood on the floor of the drum after the show had finished, in amongst the bikes and the money scattered on the chequers, thrown down by the audience above to help with insurance costs which are, as one might imagine for a show such as this, astronomical. “It’s unlucky to sweep it up, we’ve got to pick it all up by hand,” explained Jake.

There are other superstitions that linger inside this wall as well: when you drive down the ramp you have to bring the bike in facing the direction you ride (counter-clockwise) otherwise it’s unlucky, and if you do come in the wrong way you have to go right round and out, turn around and bring it back in. ‘Blue and green must never be seen’ is another superstition which has been in their family for a long time. “These things usually start if there was a crash or something and it was on a blue bike,” explained Carly. 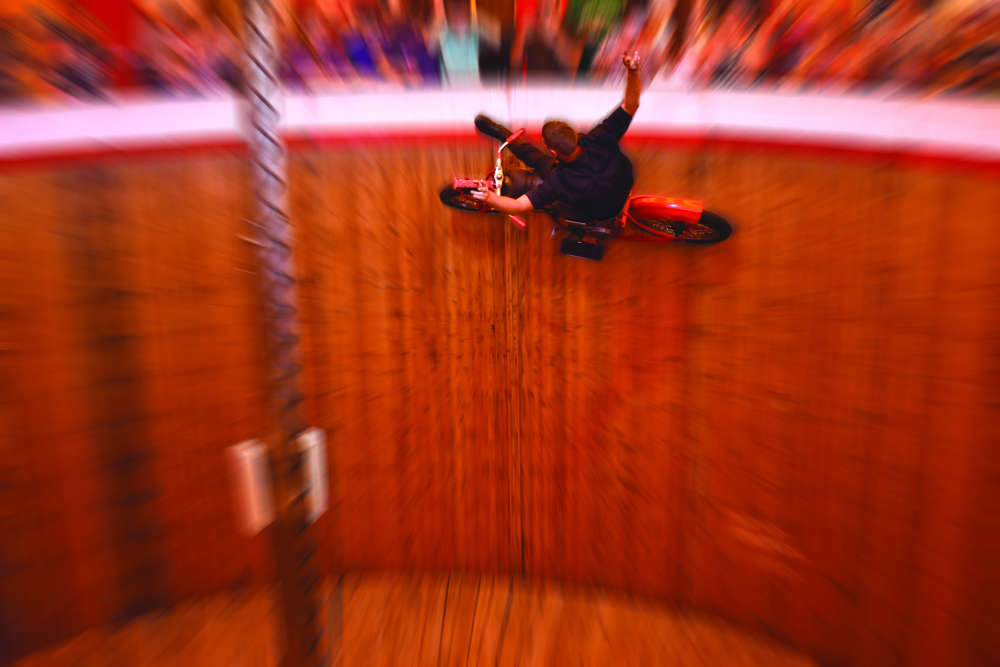 The weapon of choice

Indian Scout bikes have been the preferred motorcycle to ride on the wall since the 1920s. They are majestic beasts with wide handlebars and an accommodating leather seat. It’s a very upright position Jake adopts to ride the wall and as he starts his tricks, his ability to move across the bike is mesmerising. 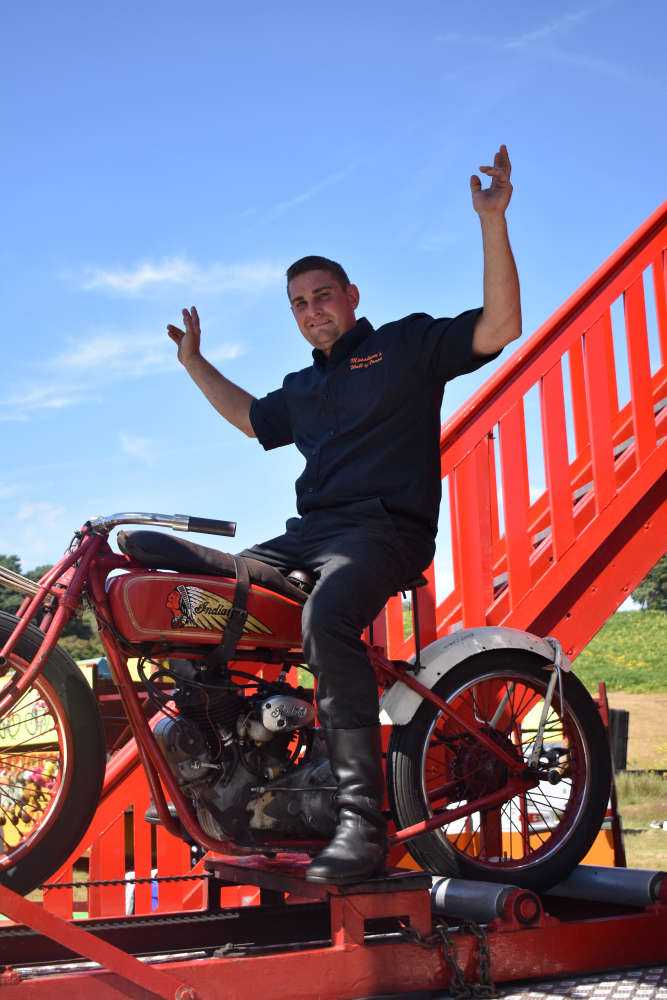 Looking at the tyres of Jake’s Indian, it’s clear to see they have got uneven wear, to put it mildly. In reality they are totally smooth on one side. “That’s how we like ‘em!” he smiled. “Takes years to get it like that, we need them like that for the tricks. We spin them around; that will come off the front and go on the back and the one on the back will be worn enough to go on the front… you’ll get years out of that. The one that came off four ago was on there for 30 years – not worn out just perished.” 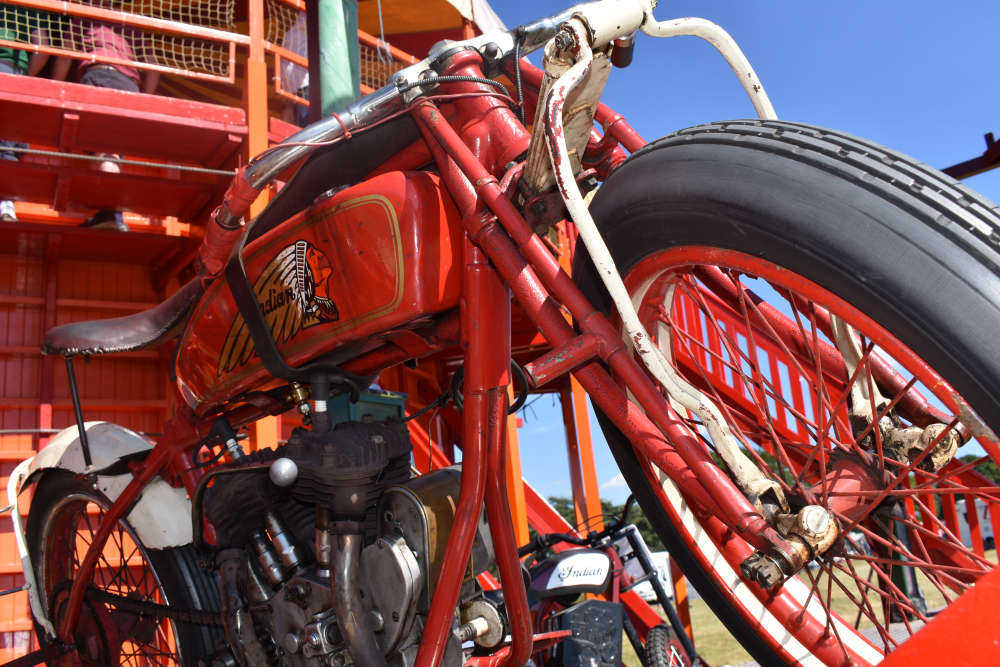 Up on the wall they ride at between 20 and 25 miles per hour, but it feels much faster when you’re standing close by. “Any faster and you start blacking out and get too dizzy,” said Jake. The riders are also pulling about 4 g up there, which Jake said you can feel in your arms by the end of the day. “He blacks out sometimes on busy days when we do show after show after show,” added Carly.

It’s time to find out how dangerous this really is.“I’ve had a fewcrashes,” Jake said, and matter-of-factly guided me through his injuries: broken ankle in three places, broken collar bone, chopped off finger, handle bar through the arm… “Anything can happen; engine seize up, puncture, bit of water, bit of oil on the wall. The worst thing you get when you come off is burns from sliding along the wall. I had one from there to my feet,” he says, gesturing from the top of his back. “I let me hands go; I was standing on the back of the bike, bike wobbled a bit, throttle opened up, pushed me over the back of the bike. We didn’t have any mudguards on the back, so I got caught on the wheel.”

And what happens to the bike when the rider comes off? Well, gravity tries to pull the rider back in so the most important thing is to push the bike away, and hope for the best. “Ninety percent of the time you can get away with it,” smiled Jake. 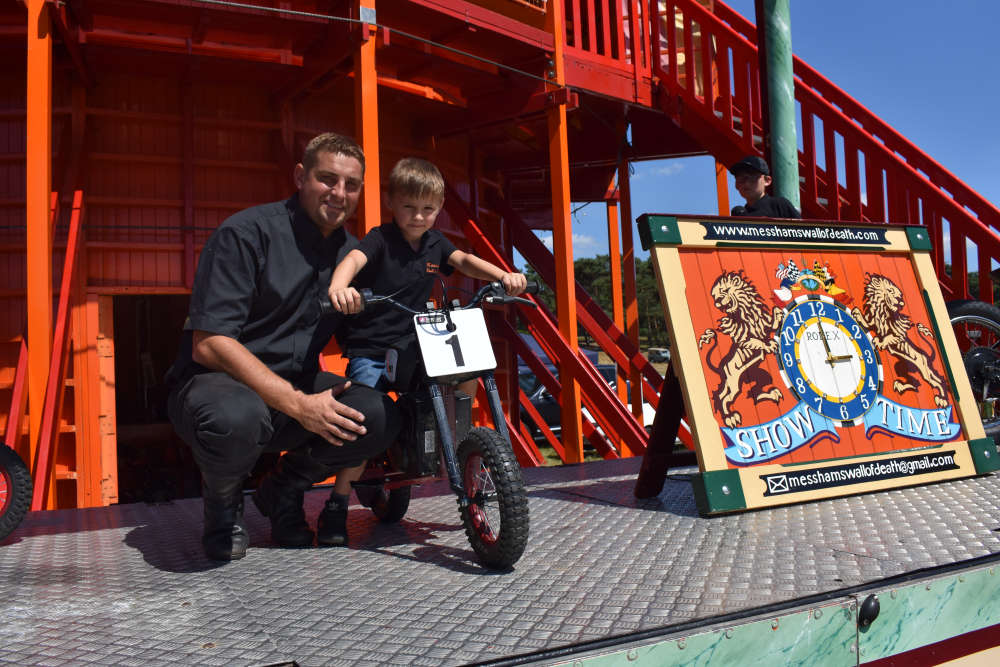 There is not much money in this, they freely admit. In fact, Carly called it an expensive hobby. But they clearly love it, and the kids seem to love it too. “They go off and play on the fairground rides and come back when they’re hungry,” said Carly. “Then we sit round of an evening, have some food and drinks.”

“We’ve enjoyed doing it, then we can pass it on,” Jake told me, but for now, he looks extremely happy just where he. Messham’s Wall of Death is, paradoxically, where he is most alive.