It's A Dog's Life: Training Bear 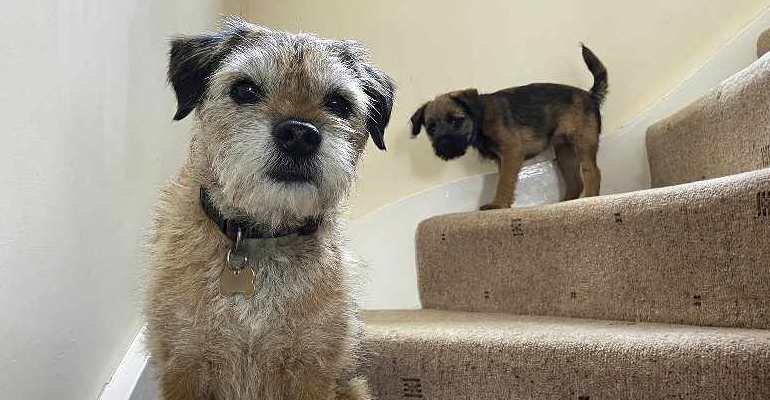 With puppy training well underway, Teddy reports on the progress his protégé, Bear, has made in recent times. As always, our favourite Border Terrier’s musings are translated into human by Helen Stockton

Well, my apprentice, Bear, is making her presence felt in our household and, as a good boss should be, I am being fair and just occasionally firm, when her puppy waywardness gets a bit too much.

‘Them Indoors’ have started to refer to me as Uncle Teds, and I rather like to see myself as the benevolent, tolerant, slightly too indulgent uncle. What is interesting is how much Bear copies me. If I run, she runs, if I sit, she sits. She wants my toys, my food and my bed. I have to say that some of the most useful puppy equipment have been a playpen, a stairgate on the kitchen door, and a small puppy crate, all designed to ensure that a mini Border Terrier gets some down time and a more senior fur can catch up on his napping.

There are certain advantages to having a youngster around. New toys have appeared, as if by magic, and I am getting lots of fussing for being a good boy. Basic training; responding to easy commands like ‘sit’ and ‘bed’, are being role modelled by me, handsomely rewarded by treats. I hope she doesn’t catch on too quickly. Bear is also being praised for any weeing and pooing she manages to do outside. Anyone would think she was excreting pure gold the fuss she gets. An amusing side effect of this is that sometimes ‘Her Indoors’ forgets herself and praises me too. As if I haven’t been doing this for years without any special attention.

Bear has just started going out on her lead. She seems to find every twig and leaf worthy of investigation and playing with, so progress is slow. ‘Her Indoors’ has nicknamed her ‘Dora the Explorer’ when she is being good and ‘Gremlin ears’ when she is in manic puppy mode. Both seem very appropriate to me.

I am, of course, starting to develop her skills. She has learnt to go upstairs, but downstairs is still a work in progress, and her rug rearranging, something I occasionally indulge in myself, is reaching new heights too. It has also been a prime spot for her little accidents, which largely and mysteriously seem to happen when ‘Him Indoors’ is in charge. ‘Her Indoors’ reckons he isn’t reading the signs, but, in fairness, I haven’t seen Bear holding any up.

As far as writing is concerned, she’s progressed from the chubby crayons to those extra-large, ergonomically shaped pencils, ideal for small paws, but I haven’t let her loose on a keyboard yet. That’s a higher level of training and we need to make sure of the basics first. She’s learning fast though, so with my help, it won’t be long…