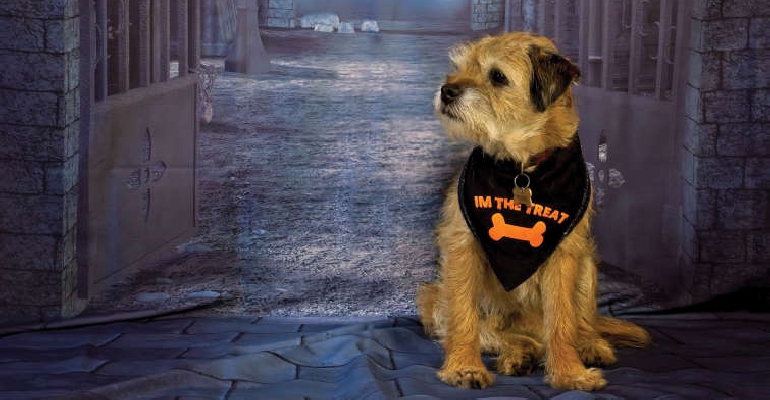 As Halloween approaches, Teddy has been pondering the influence of other cultures upon our own. Told as ever by ‘Her Indoors’, the chief provider of treats, Helen Stockton

As an island nation with a long history, it would be true to say that we have been influenced, sometimes against our rather conservative inclinations, by a range of other cultures and traditions. As Border Terriers, we come, as our name suggests, from the hinterland between England and Scotland and, I like to think, we are an embodiment of what is best about both nations. Even though we have our roots in British soil, I personally know of Border Terriers in California, Australia, New Zealand, Finland... we have, quite literally, got everywhere. We are influencers, movers and shakers, across the globe!

But this exchange hasn’t all been in one direction. According to the Kennel Club, the number of French Bulldogs in the UK has risen ten-fold between 2009 - 2015, and they are presently ranked right up there, just behind Labradors and Cockapoos in popularity. Apparently, their flat faces and large eyes and ears give them Instagram presence and that contributes to their appeal. They seem a fine breed to me, and probably have about as much chance of being British through and through as they do of being French these days. They have been assimilated into the British dog owning culture enriching our traditional, native breeds.

Whilst we might be rightly proud of our own heritage, influences from elsewhere are often a good thing. The idea of barbeques, that staple of British summer time, came from the West Indies, so we have them to thank for the divine right to the last sausage. And talking of food, isn’t curry our favourite national dish? If I dare to raise the spectre of Christmas in October, I believe the practise of decorating our houses and gardens with lights, was heavily influenced by the German tradition, and Santa’s traditional garb, making him an easy target for the canine home guard, came from the USA.

Which brings me to another American tradition that has been assimilated into our culture, Halloween. Some begrudge the trick and treating, pumpkins flickering in the twilight and children in fancy dress, as a foreign incursion. Personally, I’m not in favour of dressing up, and all those shops selling Halloween costumes for dogs need to take a long, hard look at themselves, their values and ethos. However, I am in favour, of the treats option, and those little treat buckets that encourage a generosity of donation get a big paws-up from me. You really can’t have too many goodies! And if you want a trick, let me introduce you to my apprentice, Bear, she’d be happy to oblige in the mischief making department. She’d also be the better option for a fancy dress outfit as I’m not cut out for a scary role. Happy Halloween!