Memories of U-Boats, Convoys and D-Day 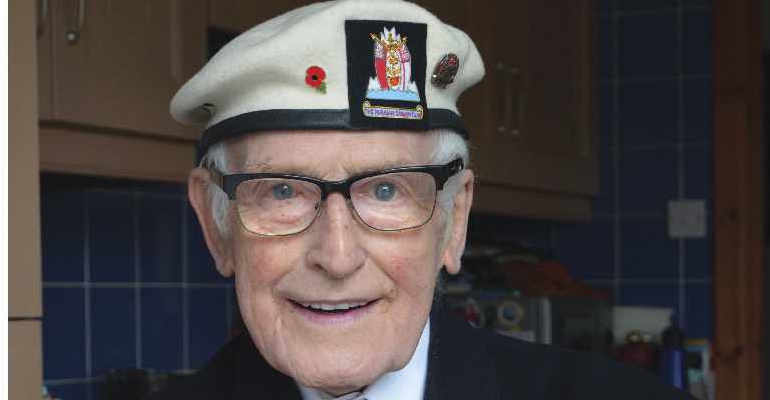 Ever heard the story about the man who was at D-Day, on the Arctic Convoys, Atlantic Convoys, and helped thwart the challenge of the U-Boats? This is it; this is Tony Snelling’s story, as told to a fascinated Robert Veitch

I really wanted to be in the Fleet Air Arm,” revealed 97 year old Tony Snelling as we sat in the garden of his Horsham home. Born in Twickenham on All Fool’s Day 1923, he was a twin. “Dad’s brother didn’t survive childbirth,” his daughter Sue Holmes revealed, “Dad lived a life for both of them.”

Aged 18, Tony was conscripted in 1942, undertaking six weeks training at HMS Ganges in Essex, before transferring to Chatham to await drafting. “The food in Chatham was pretty appalling, with so many to feed they would start cooking the day before.” 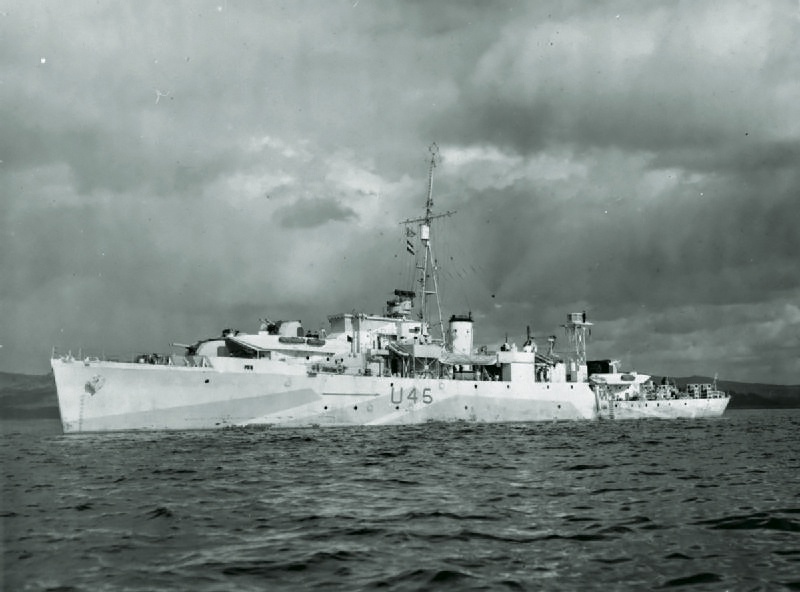 Once drafted, Tony took the sleeper train to Glasgow, and made his way to Yarrows shipyard in Scotstoun, on the banks of the Clyde. “I joined a Sloop named HMS Wild Goose under Captain Walker. It was brand new, still in dry dock when I arrived. She looked terribly small.” She was a convoy defence vessel, a hunter-killer of U-boats. “Antisubmarine training took place in the Inner Hebrides, under the tutelage of a Vice-Admiral nicknamed the “Terror of Tobermory.”

Active service began on Atlantic Convoy HX 236 in May 1943, escorting merchant vessels sailing from New York. Similar support roles would continue throughout the summer “We slept in hammocks,” Tony recalled. “The weather could be terrible. It was scary at times.”

HMS Wild Goose escorted landing craft at the Italian landings of September 1943. “The Mediterranean seemed so warm after the north. The Italians seemed short of soap so we exchanged Cameo. I got one for my mother  and for my sister, but that was after things had quietened down.”

In November 1943, HMS Wild Goose provided escort cover across the Bay of Biscay for Convoy SL 140, which had departed from Freetown in Sierra Leone and was met at Gibraltar. The Nazis had U-boat bases in Western France at Saint Nazaire, Lorient, La Rochelle, and Bordeaux, “so we tried to stop them getting out to the convoys.”

“It was rough in the Bay of Biscay but the worst weather ever was off  Cape Wrath in Scotland. On a small ship in a large storm, unless it was absolutely essential you kept off deck. It was virtually awash; you were almost guaranteed to go over the side. The screws of the ship emerged from the water, into the troughs of the greatest waves.”

In January 1944 HMS Wild Goose helped escort Convoy SL 147 across the Atlantic and became involved in the ‘Six in One’ mission that sunk six U-boats. On return to Liverpool the crew welcomed King George VI on board.

Arctic Convoy JW 58 left Liverpool on March 27th with 47 merchant vessels. “We were led by an icebreaker after fuelling at Reykjavik. Apart from some air attacks it was fairly quiet,” he remembered. “It was very cold. On deck you dare not touch the boat without  gloves for fear of freezing to it.” Ice formations on the foredeck could affect  stability. With a lot of ice, the ship could become top heavy. “To abandon ship in the Arctic was a death sentence.”

“Arriving in Murmansk on April 4th, we spent two or three days ashore, they were friendly people but the language was a bit difficult.” The  return convoy RA 58 sailed to Loch Ewe, near Ullapool. JW58 / RA58 was hailed as a very successful expedition and the last for many months, as Naval eyes turned south, towards the beaches of Normandy.

“I judge myself lucky to have survived,” he recalls with a calm eloquence, “I saw ships sink.” It seemed he was revisiting the inner turmoil in his mind while he talked. “I was relieved when it was all over.” Winston Churchill described the Arctic Convoys as ‘the worst journey in the world.’ 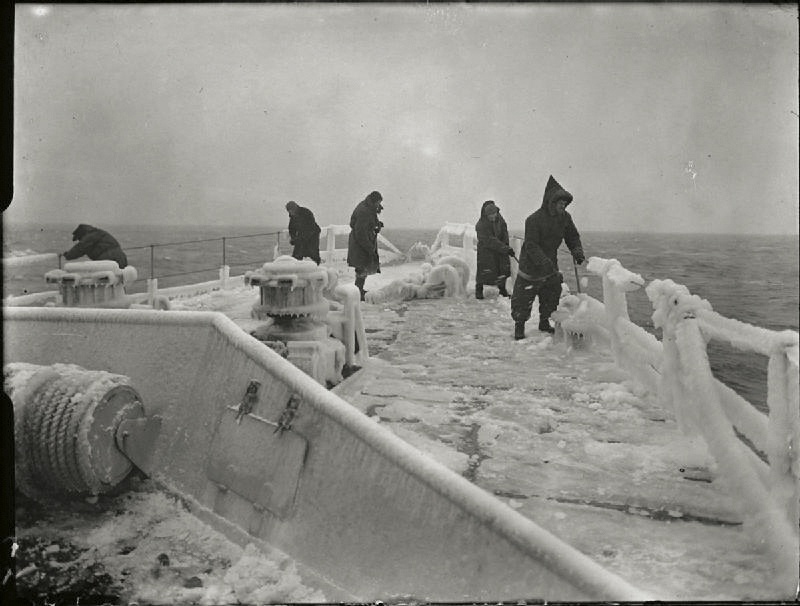 “I first saw HMS Tyler at Lissahally in Northern Ireland, she was built in 28 days. An American frigate on loan to the British, “they prioritised comfort on board, there were bunks not hammocks.” As D-Day approached HMS Tyler was moored in the Solent, off Ryde in readiness. Tony and some others took a tender to a mainland pub on the eve of  the invasion, but he got the tides wrong and they were stranded.

Tony recalled D-day, “We sailed to Normandy early on June 6th 1944, to Arromanches (Gold Beach), escorting landing craft. I won’t say it was hell, but there was flack everywhere, in the direction of the major ships and the return from the German turrets. We could see landing craft going in. When the 15” guns on HMS Warspite  were firing you felt the kick from their power. The number of ships and amount of equipment seemed absolutely incredible. It was beyond description, very grim.” He paused, as if momentarily reliving the day, “I feel sometimes I was fortunate to survive.” After the landings Tony made several crossings from Southampton ferrying supplies for the troops, and delivering parts for the Mulberry Harbour and the PLUTO cross channel oil line.

Latterly HMS Tyler patrolled St. Georges Channel between Fishguard and Rosslare. While docked in Milford Haven, shore leave was granted, “We went to Haverfordwest by train. We didn’t judge the return journey times correctly, and had to borrow bicycles to get back for embarkation. We left the bicycles outside the Police Station.”

After the war in November 1945, Tony crewed HMS Tyler to the naval shipyard in Philadelphia, returning her to her owners. He remembered, “The Americans were exceedingly kind, I have some very happy memories of the way we were treated.” 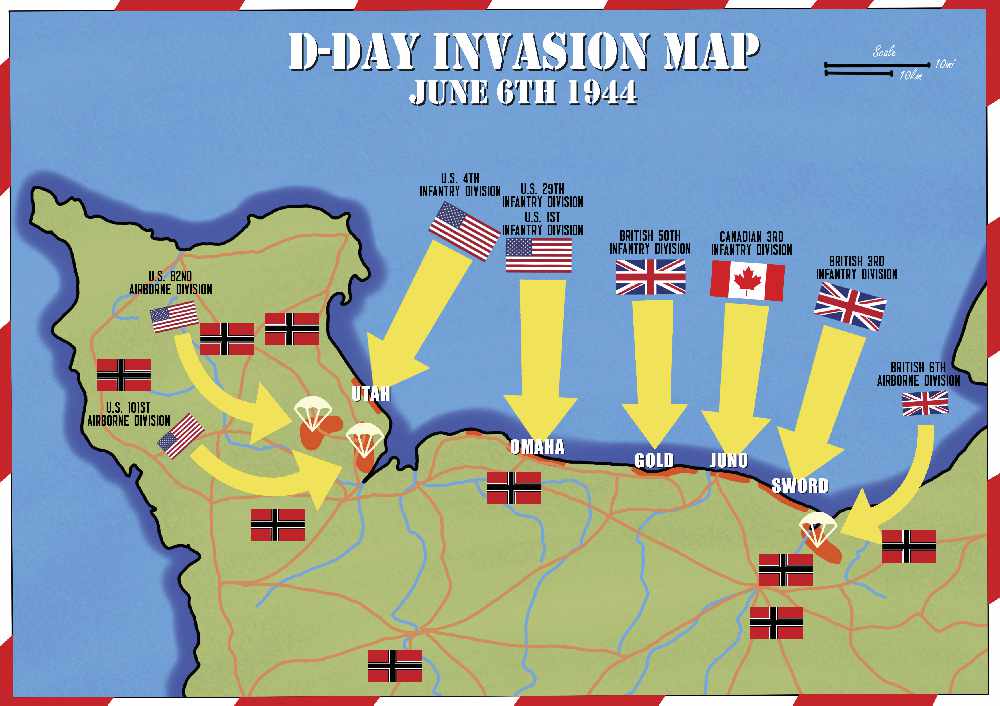 Tony left the Royal Navy to join Southern Railway. “We lived in Kingston-Upon-Thames, then Catford, moving to Horsham in 1968. ”I ended  up on the board of British Rail and received free lifetime first class travel –  which has proved useful with post-war reunions.”

In 2013, 120,000 members of the Arctic Convoys (or their next of kin) received Arctic Star medals from the Ministry of Defence, which were presented with the white beret Tony delights in wearing.

In June 2014 Tony met Prince Charles and Camilla on the Normandy beaches for the 70th Anniversary of D-Day. That summer he also met the Queen at a Buckingham Palace WWII Veterans Garden Party.

Also in 2014 Tony received the Russian Ushakov Medal, awarded ‘for courage and bravery’ in defence of the Soviet Union in maritime theatres. “I received it at the Russian Embassy from the ambassador. Plenty of vodka was drunk!” He then attended the unveiling of the Arctic Convoy Memorial in St. Petersburg.

After former President François Hollande pledged to honour all surviving British veterans who had helped liberate France; Tony received the Légion d’honneur at the French Ambassador’s residence in Kensington in 2015.

In November 2015 Tony caught pneumonia in Moscow, during a visit to the Tomb of the Unknown Soldier and eternal flame. After hospital treatment he stayed at the British Embassy before repatriation. A London based Russian banker paid the medical bill which was several thousand pounds. “Arctic Convoy crews are fêted in Russia and we were ever so grateful,” his daughter Sue remembers.

On the 75th Anniversary of D-Day, Tony attended the National Commemorative Event at Southsea before departing for Dunkirk onboard a cruise liner. “As we departed Portsmouth we passed aircraft carrier HMS Queen Elizabeth. Her crew and Prime Minister Teresa May were on the flight deck, saluting us. It was very moving.”

At Arromanches, “The most moving thing was the red Poppies on Gold Beach.” His daughter Sue noted, “President Macron shook Dad’s hand and thanked him.” On the way back the cruise liner diverted to Dover because of storms although Tony quite enjoyed it, “Even now, I love the rough seas.”

Tony reflected on Remembrance Sunday trips to the Cenotaph, “I used to go but you don’t see so many white berets these days.”

Is there really a girl in every port? “Yes” he laughed “but you didn’t get much time. Liverpool and Belfast could be great after six weeks at sea!“ he chortled with a twinkle in his eye.