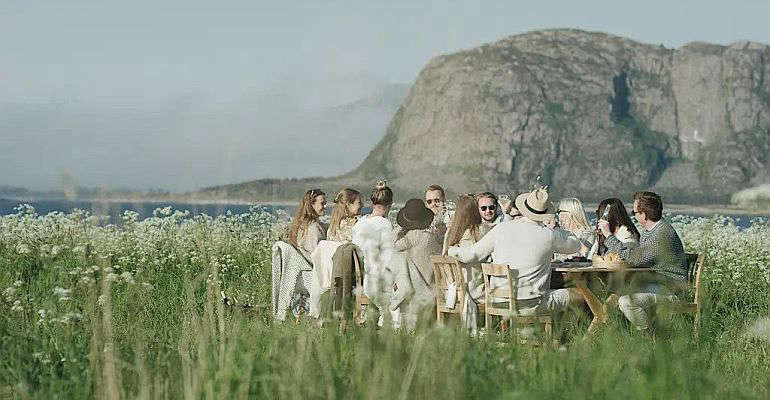 Northern Europeans have found the perfect formula for a stress-free break...

Try to contact a Swede, Dane or Norwegian any time between June and August, and you’ll be lucky to get a quick response. For Scandis, holiday time is precious. It presents a treasured opportunity to switch off, focus attention on friends and family, and celebrate the simple pleasures of life.

But rather than racing to foreign climes, most make use of their summerhouse – a holiday home set in the mountains, hidden deep in forests or within skipping distance of the sea.

In the last few years, Scandis have been opening the doors of these second homes to foreign visitors, allowing us all to share in a stress-free holiday culture that’s been carefully cultivated over hundreds of years.

What’s so special about summerhouses?

Built by his grandfather in the 1960s, Simon Lind Fischer’s summerhouse is located in small fishing village Thorup Strand, on the northwest coast of Jutland in Denmark. He spends weekends buying fresh catch from fishermen and enjoys running through the forests where he occasionally sees deer.

“In the summerhouse, we re-discover each other and what life actually is all about: relations and the appreciation of the present time and the small things in life,” he explains.

Spending quality time with family is also a priority for Dane Sara Zankal, who owns a summerhouse in Sejerøbugten, just over an hour’s drive from Copenhagen.

“I love having a ‘second home’ where things, habits and daily life are totally different,” she says. “In our summerhouse, the kids climb trees instead of watching iPad and we swim several times a day. In the evenings, we play board games.

“When the car turns the last corner down the little dirt road, you can just feel tensions and stress leaving your body, how your breath slows down and you are instantly more relaxed.”

Although the concept is similar across Scandinavia, each country has its own characteristics and traditions. Norwegians enjoy hyttekos (cabin cosiness) in their mountain cabins, seaside huts and remote cottages. Many were originally built to house fishermen along the coast or to provide shelter for workers employed as a seter – a Norwegian summer farm set in higher pastures.

Sweden, meanwhile, has a soft spot for coastal clapperboard cottages, originally built by upper classes in the 19th century to avoid overcrowded cities.

“But we also see we see a counter-trend,” points out Simon. “The simple lifestyle with tiny houses can also be seen as luxury for the soul, because it is more stress-free and the limitation of what to do in the house makes life easier and can draw the guests closer together.”

According to a 2019 count by Statistics Sweden, there were 607,000 holiday homes in the country. Try the Stockholm archipelago, Skåne, the islands of Öland and Gotland, or the west coast and Småland.

In Denmark, there are approximately 200,000 – of which 40% are rented out. Most are located along the coast in Jutland, Djursland and the north coast of Zealand. Islands such as Samsø, Fanø and Anholt and Bornholm are also popular.

In Norway, 22% of the population owns a cabin, used both in winter and summer. Find most of them in Oppland and Hedmark, north of Oslo or in Southern Norway and Hordaland, in the Bergen region.

Online platforms such as Booking.com and Airbnb feature several Scandi summerhouses on their books. In Denmark, try Landfolk.com for a selection beautifully-designed homes; in Sweden Stugknuten.com has an excellent selection; and for Norway, Norgesbooking.no is a good bet.

Part of a secluded island community living midway between Jutland and Sweden, this woodland log cabin is perfect for families with young children. Stroll down to the beach and gather organic groceries from a nearby store. Sleeps 10 and can be rented from £149 per night (landfolk.com).

Set between the sea and fjords, this edge-of-the-world cottage is an escape from reality. Take morning swims from the beach, have picnics on the rocks or warm up inside, in front of an open fire. Fly into Alesund airport, a 15-minute drive away. Sleeps six and can be rented from £517 per night (62.no).

Go for long walks in the fairy-tale forests on this southern region, where author Astrid Lindgren set her famous stories about ginger-haired heroine Pippi Longstocking. The property also has canoes for hire. Sleeps four and can be rented from €490/£408 per week (sweden-holidays.com).