Nine Of The Most Famous Bonfire Events In The World 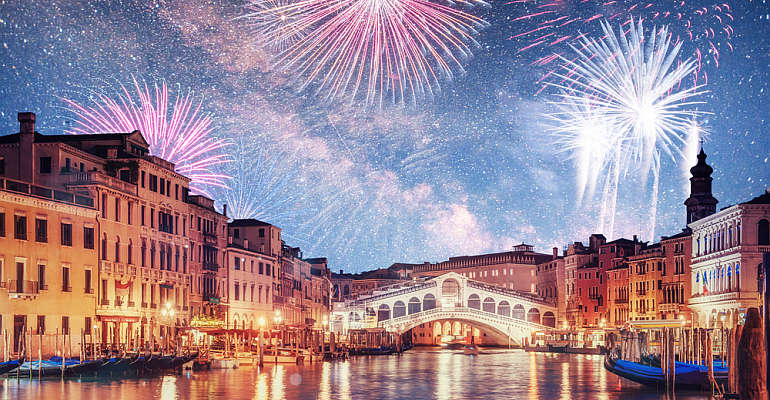 Now that you've had a go at our quiz, find out more about some of the most exciting global firework and bonfire events - if you need any inspiration for your own displays this year! 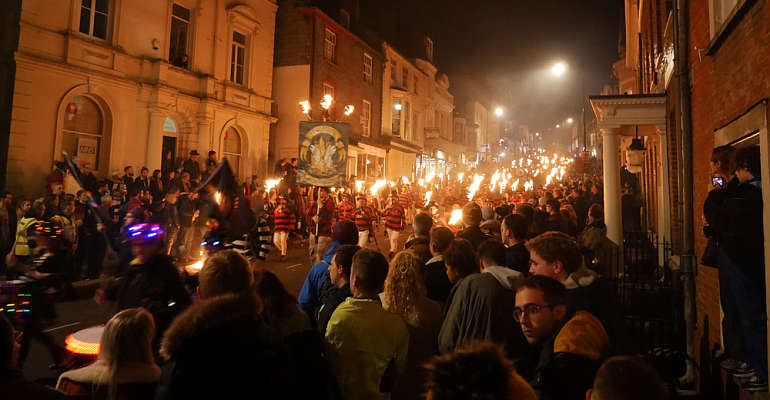 Known as the bonfire capital of the world, the usually peaceful village of Lewes turns into a raucous parade for one night, unmatched across England. Six bonfire societies hold different events across town, while drum beats sound and flaming torches light the way. The town holds a strongly rooted tradition in the celebration of Guy Fawkes Night, with the first two bonfire societies formed in 1853.

Festa del Redentore is a mid-summer festival that can be traced back to 1577, and celebrates the city’s deliverance from a terrible plague. It attracts thousands of people every year for its spectacular fireworks display. The fireworks start last until well past midnight, lighting up the spires, domes and bell tower of the city with a kaleidoscope of reflections and colours. At dusk, numerous small boats decked out with bright lanterns and decorations begin to flock into the Giudecca Canal and St. Mark’s Basin. 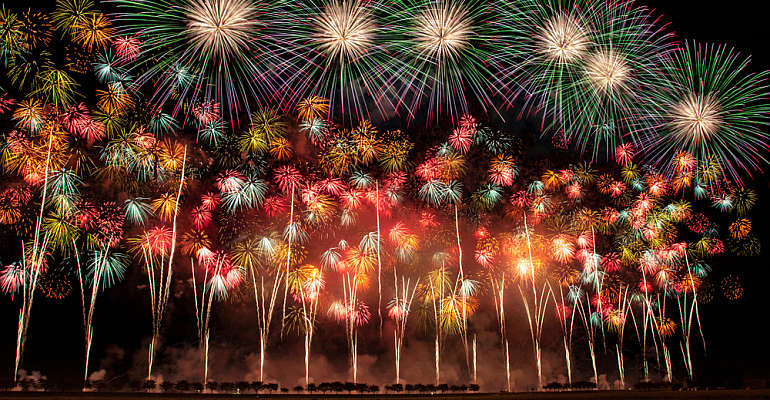 Considered the best display in Japan, this competition is by invitation only, and consists of 30 of the country’s best pyrotechnic artists launching self-made fireworks. Held every year on the fourth Saturday of August, the spectacle regularly draws more than half a million people! 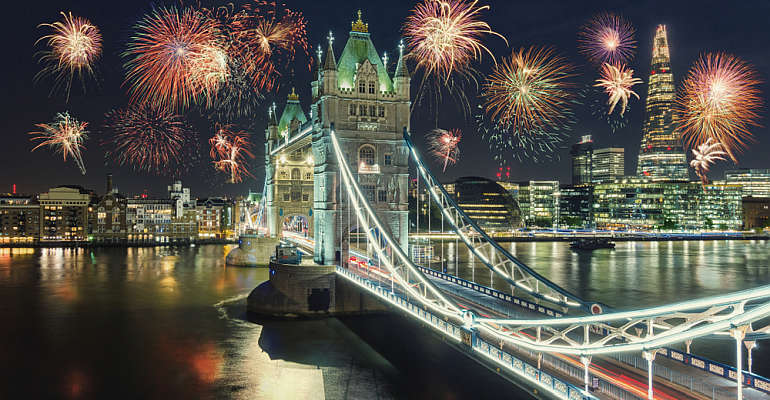 London attracts thousands of tourists with its impressive fireworks production every New Year’s Eve. When the clock strikes midnight, the city’s landmarks are lit up by the pyrotechnics. The first major display in London was to celebrate the year 2000, when an estimated three million people gathered around the Thames to take in the sights! 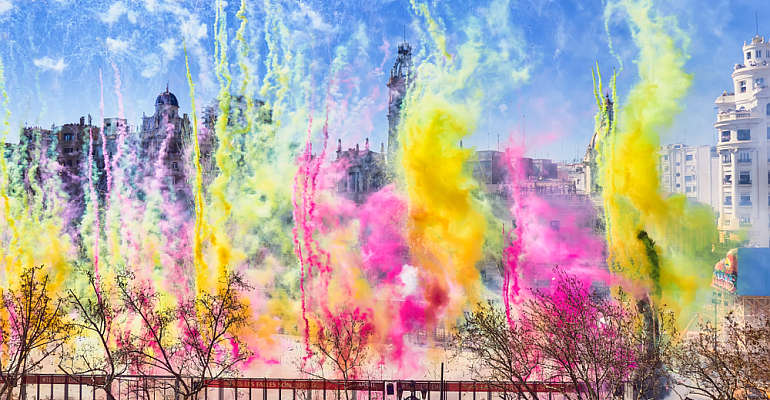 A four-day spectacular pyrotechnic festival in March, Las Fallas culminates with a big and bright fireworks show. During the festival, the Fallas, or ninots, giant papier-mâché figures modelled on popular celebrities and politicians, can be seen on display throughout the city. They are then stuffed with fireworks and ceremoniously set alight. 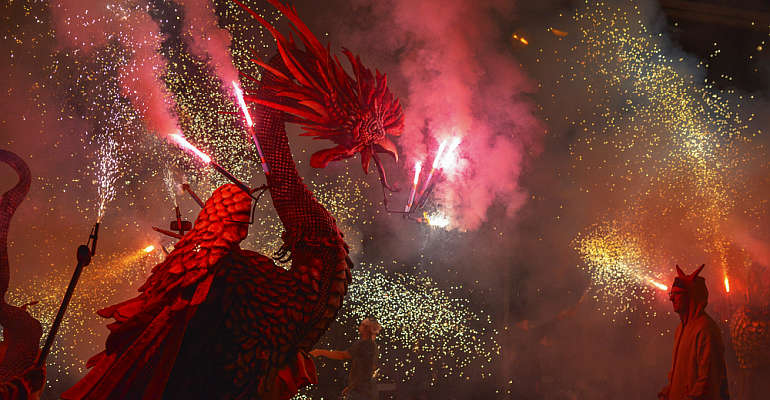 Part of Barcelona’s annual La Mercè Festival, the Correfoc (or ‘fire run’) is actually a regular at many Spanish festivals, although the country’s capital is by far one of the biggest. Groups of people dress up as devils and dragons, wielding sparklers and setting off fireworks in the streets, all to the delight of the crowds. With roots in tradition dating back to the 14th century, the Barcelona edition began as a Show of Fantastical Beasts in 1979. The 5-day street festival is the highlight of Barcelona’s calendar, taking place at the end of September and held in honour of the patron saint of the Catalan city. 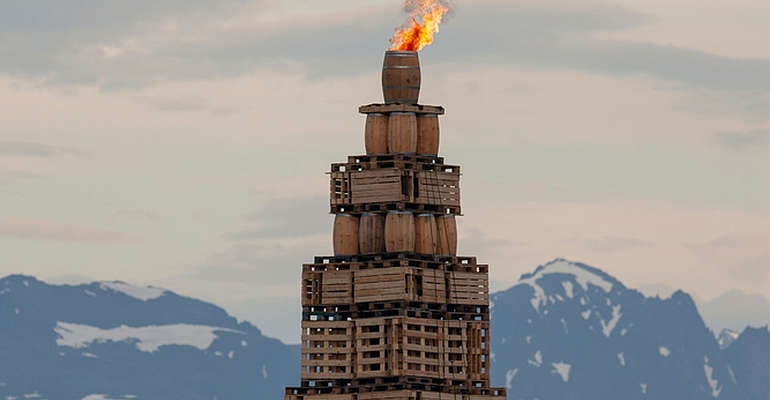 To see the world’s biggest bonfire you’ll have to visit Alesund, Norway, where wood pallets are stacked over 40 meters high on an artificial island. The occasion? Sankthans, or ‘Midsummer’, an annual festival in commemoration of John the Baptist’s birth. The day is celebrated on the 24 June (around summer solstice) in Scandinavian countries and other parts of Europe. 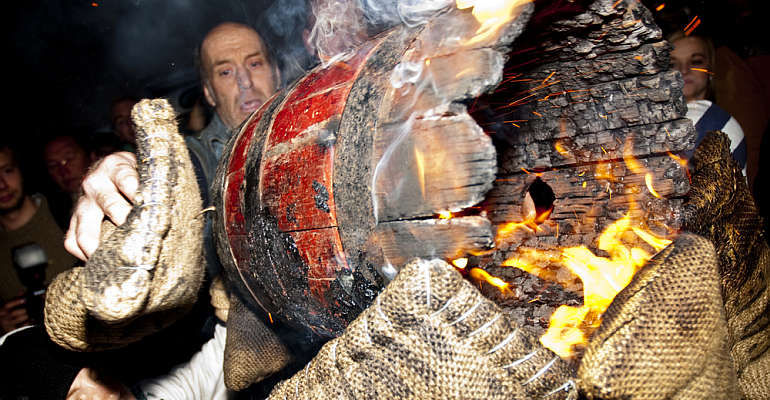 In the small town of Ottery St Mary, the bonfire and fireworks are not the focal point of the community’s celebrations. Instead, the local townspeople carry flaming barrels of tar through the streets, with small barrels for boys, medium barrels for youths and women and big ones for the men. Traditionally, the barrels are set on fire at pubs and hotels around the town and a strict schedule is followed until midnight when the final barrel is carried in the square. 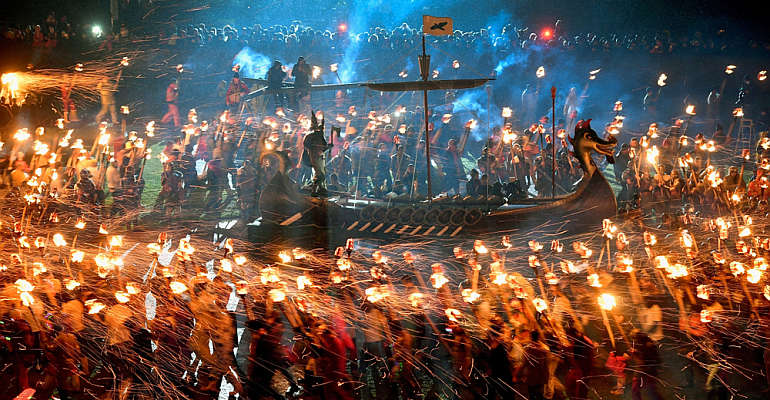 If you’ve ever wanted to see Vikings, this is the festival to see! Described as a Northern Mardi Gras, its origins stretch back 1,200 years, although the festival started in the 1870s. It’s held on the last Tuesday of January. On that evening, nearly 1,000 men march in ranks, carrying fencing posts topped in paraffin-soaked sacking, before a rocket cresting over the town hall marks the start.