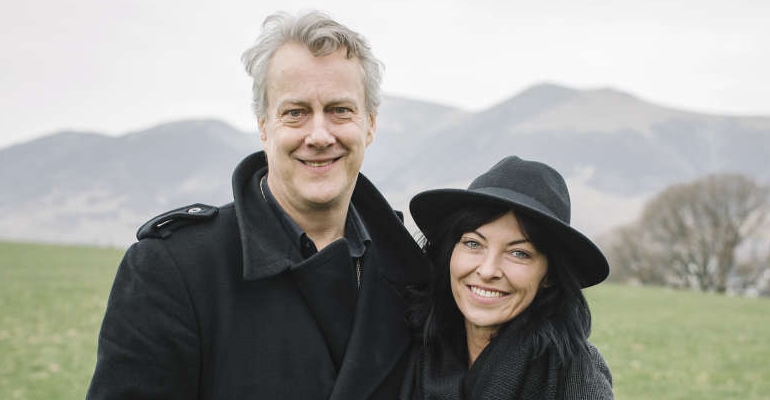 Stephen Tompkinson and Jessica Johnson are a couple in real life and will be performing together this September. They are heading to Sussex to tread the boards in Horsham, Robert Veitch chatted to them while they cooked dinner together

Stephen Tompkinson was born in 1965, in Stockton-on-Tees, and has an elder brother, John. The family moved to Scarborough in 1969, then relocated to St. Annes in 1971. Dad, Brian managed a branch of the Yorkshire Bank, while mum, Josephine taught nearby in Blackpool.

Stephen went to school in Lytham and later in Blackpool, growing up with a love of cricket and acting. Laurel and Hardy were his heroes and he has both their autographs. AA Milne’s Winne the Pooh, written in Hartfield and set on Ashdown Forest is among his favourite books.

Aged 18, Stephen won a place at the Central School of Speech and Drama in London. After his grant was withdrawn, his parents backed him financially and their faith was rewarded two years later when they saw him performing. He graduated in 1988.

Since then, Stephen has gone on to appear in a host of familiar TV programmes including: Drop The Dead Donkey, Ballykissangel, Grafters, Bedtime, Wild at Heart and DCI Banks. In 2019 he returned to the stage to set out on the 40th anniversary tour of Educating Rita. Two years and three lockdowns later Stephen and his co-star, Jessica Johnson are bringing the play to Horsham’s Capitol Theatre from 7-11th September for 8 performances in the penultimate week of the seven-week run.

I caught up with the pair of them over the phone while they were cooking their dinner, at home in Whitley Bay.

Jess was animated at the prospect of coming to Horsham. “I haven’t been so I’m very excited. One gain from touring is going to all these lovely places, meeting new and interesting people, it’s a real eye opener.”

Stephen added, “We’ve been touring this production for almost three years, so it’s something that we’re very proud of. It keeps developing. We’ve had the lockdowns and had to make changes within the show. We’ve made it snappier so there’s no interval; we get it done and dusted in about an hour and a half. It’s just the two of us on stage. It’s a joy to do such a great play and once the train leaves the station, we’re off and running!”

Willy Russell wrote the play for the Royal Shakespeare Company in 1979, although the first two months of writing yielded little of worth. Then Rita strolled on to the page and Frank would follow. The themes still resonate today, and include personal development, formal education, social class, and choice.

Educating Rita revolves around the relationship between Rita, a hairdresser who signs up for an Open University course in English Literature; and Frank, a lecturer who wants to be a poet, but is tutoring to pay for the drink he so enjoys. Two lost souls, two mismatched people, who help and have a profound influence on each other. Willy Russell later wrote Shirley Valentine and Blood Brothers. 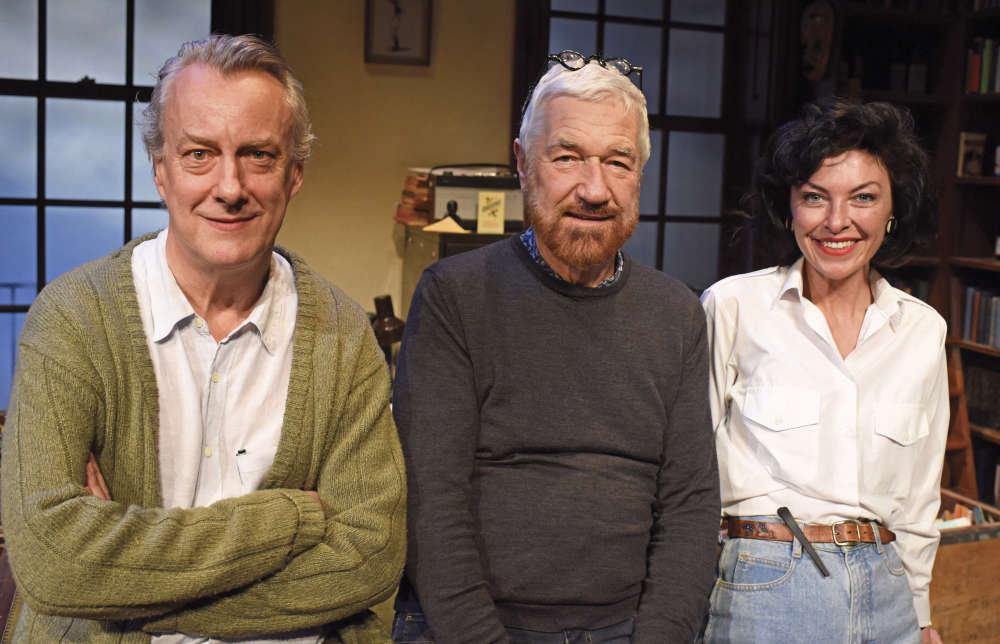 Stephen told me, “Willy Russell’s writing is great. They say you should write about what you know and the two characters are both Willy in a way. He had one ‘O’ level and was a ladies hairdresser for a number of years; then he went back into education to become a teacher. So he knows both characters and the interplay between them. It’s just Rita and Frank on stage in Frank’s office, over the course of an academic year and the audience invest in that relationship. It’s very poignant as well.”

Jess recalled the early days in 2019. “We had a short warm up tour and then we went into lockdown. It was heartbreaking to be taken off stage; it was on a Tuesday or a Wednesday. Then we had a great opportunity last August at the Minack Theatre on the Cornish coast. It was spectacular to be able to perform outdoors.”

Stephen remembered, “We played through storm Ellen and storm Francis, being upstaged by rainbows, dolphins and seagulls.” Jess remembered the Minack experience as, “one of the most amazing experiences I’ve had in theatre.”

It’s clear that people all over the country are bursting to get back out and enjoy some culture and entertainment, as Jess noted. “We feel exactly the same, double lucky that we get to perform an amazing play, a British classic.”

Jess had her first encounter with Rita at youth theatre. “My teacher gave me the script for a National Youth Theatre audition when I was about 14 or 15. I fell in love with Rita, as I’m sure many people who go back into education as a mature student or change direction in life also do. She really resonates with people who have changed their careers and their lives. People are very protective of her.

Stephen’s first encounter was similar. “I saw the play before I saw the film. It was in the early 80s, when I was also 14 or 15, I was given a copy of the script, which I rehearsed in the garage with a school friend. When I met Jess in 2017 we just started talking about it.” Jess had done a short run in Durham and Stephen had relocated to the northeast. “She casually said ‘you would make a good Frank’, so I read it again and realised I was the right age to play him. We took it to (the producer) David Pugh and auditioned in front of David, and Willy Russell’s daughter, who helps looks after her father’s estate. The rest as they say has been joyous.”

Julie Walters starred in the original 1980 run at the Donmar Warehouse and reprised the role in the 1983 film with Michael Caine. Jess revealed, “I am a Julie Walters fan. I’ve never had the privilege of meeting her and I don’t know if I would recover from meeting her, but I would love to meet her, she’s my hero. She was a huge inspiration when I was growing up.”

Having made Jess aware that Julie Walters lives in the village of Plaistow, about 15 miles west of Horsham, she seemed astonished. “Hey now, behave yourself,” she said with a nervous laugh after pausing to catch her breath. 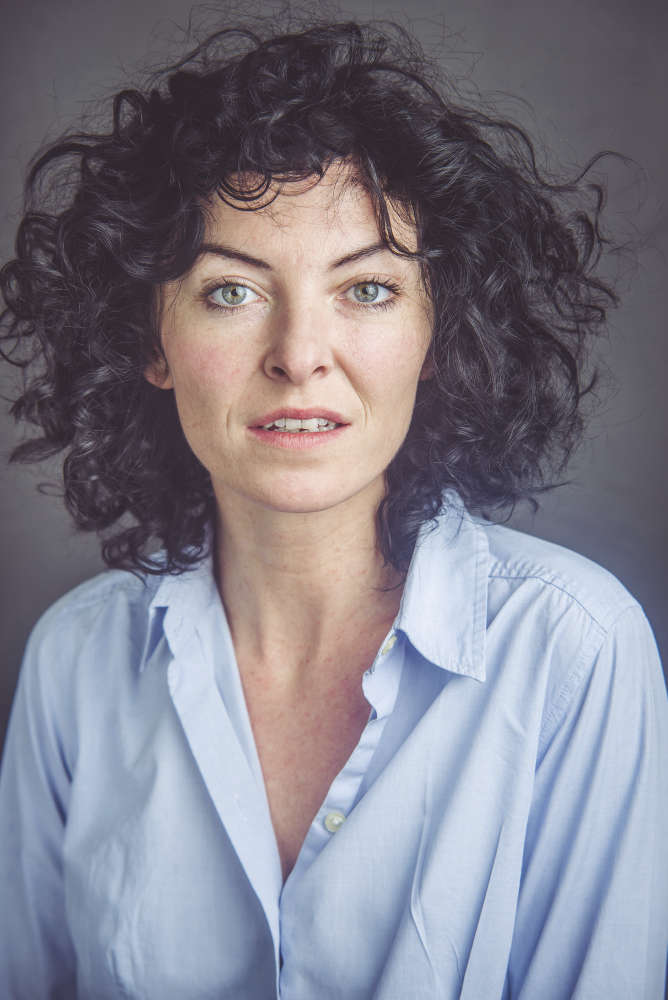 Stephen told me, “We paid a little homage to Michael Caine. Frank’s teaching certificate on the wall of the set, has been signed Michael Caine… We should get them both along to see it,” he chuckled.

Michael Caine wrote in his 2010 autobiography “To me, Educating Rita is the most perfect performance I could give of a character who was as far away from me as you could possibly get, and of all the films I have ever been in, I think it may be the one I am most proud of.”

Sussex may be an unfamiliar landscape for Jess, but Stephen has good memories of the county. “We filmed the second series of Grafters in Brighton. I lived in Hove for a while and my daughter was born in Brighton. But I’ve never been to Horsham so I’m looking forward to it. The pictures we’ve seen of the town look lovely.”

Stephen’s career portfolio is extensive. His character, Damian Day, from Drop the Dead Donkey is ingrained in my funny bones for his sensationalised reporting, creating fake news before fake news was real… way ahead of Donald Trump. “That was down to the talents of Andy Hamilton and Guy Jenkin, we were lucky to have such amazing writers. No one had done a sitcom based in a TV newsroom before and we all just accepted that the BBC and ITV must be pure as the driven snow. We were inundated with stories from journalists who wanted us to put things out there, a real Pandora’s box. We burst the bubble a bit.”

For many people Wild at Heart was a favourite programme and Stephen recalled it fondly. “It was a lovely family show and I think there should be more things like it, whereby three generations of the same family can sit down and enjoy the same programme."

In contrast to Stephen, Jess has focused on theatre work. “I’m from Sunderland, very quiet, very shy. I’m a theatre girl, we’re just cogs that keep culture moving along. Initially, I worked in theatre, film and TV and then I went back to study at University aged 23, so I did it the other way around. I went back and forth in life, people are ready to study at different times.”

A real life link to Rita I suggest. “Absolutely. It’s a great responsibility playing her, she’s like a relative and people hold her very dear to them. You‘ve got to really try and live up to their expectations. People change course during their lives; it requires a great deal of bravery and Rita has bucket loads of it.” 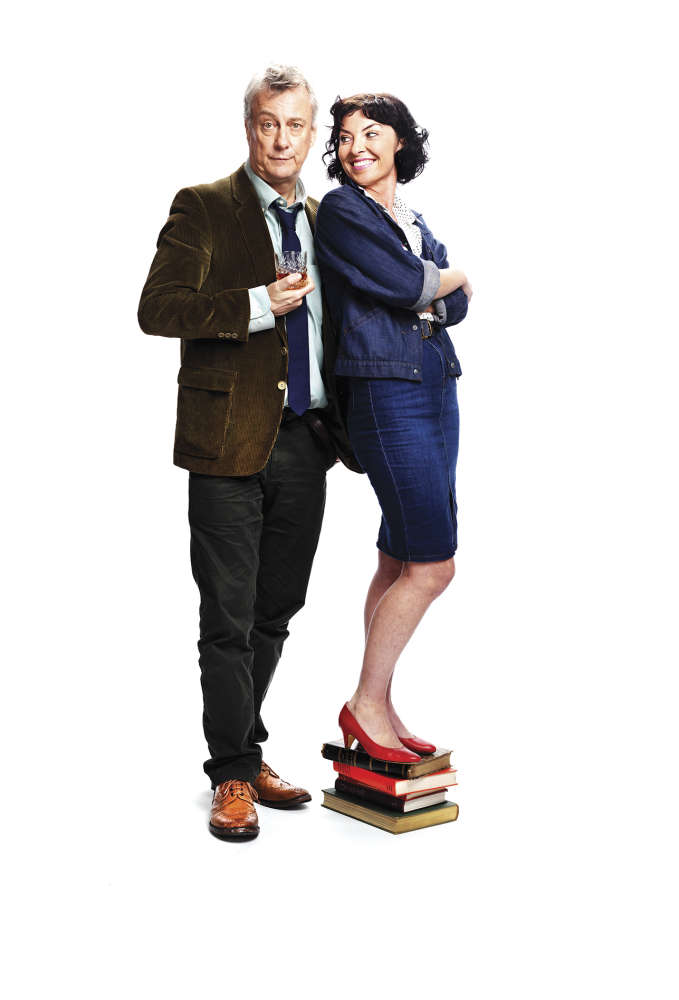 Away from his career Stephen maintains an association with Alzheimer’s Research UK. “I lost my dad in 2015. He deteriorated over seven years from dementia. I’m very keen to raise the profile of the charity and for the cause, because we’re all getting older and it will be a disease that affects all of us. We need more money to go into it, for research and development.”

With time running out, and their dinner almost cooked it seemed shrewd to ask Stephen about his Twitter bio, which states ‘I used to deliver pigswill.’ He recalled, “My first Saturday job was at a fruit and veg store that also did fish and chicken. There would be quite a lot of waste and a lot of it would end up in pigswill buckets that we delivered to farms. It was one of the treats of getting out of the shop,” he chuckled.

There’s obvious warmth and understanding between Stephen and Jess as they finish each other’s sentences and enthuse about their week in Horsham and their play. We could have continued chatting, but their dinner was ready and I had been suitably educated…