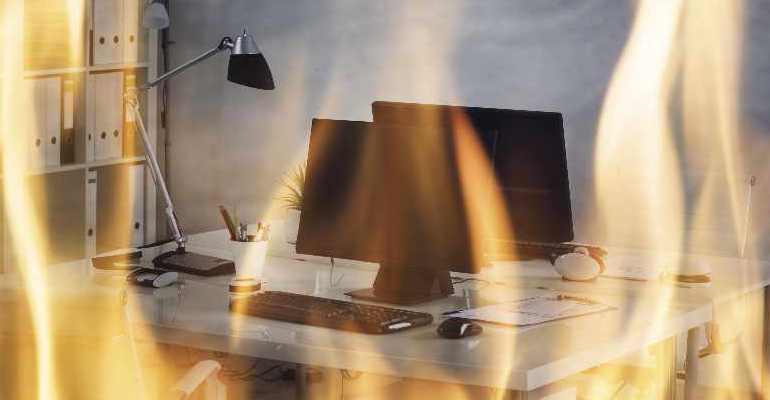 Photographs and news footage have reminded me that the Uckfield flood was twenty years ago. At the time we were fortunate, our offices then were at New Olives Yard, halfway up the High Street and above the flooded area. Seeing the photographs and the film again made me remember that although we were lucky that time, we did have our own disaster in 2012.

My telephone rang early on the morning of Monday 3rd September 2012, but I missed the call and didn’t receive the message until 6am. The message was short and blunt, “The office is on fire, get here as soon as you can.”

I lived around 30 miles away from the office and the journey seemed to take for ever, but I wasn’t prepared for what awaited me. Uckfield High Street was closed, the road blocked by Police cars and Fire engines. Although the fire was out by the time I arrived, the smell of the smoke was strong. A crowd of onlookers had congregated behind the police barrier. TV cameras were recording for the next local news bulletins.

Fortunately, fire doors inside the passageway helped prevent the fire spreading into the rear building, but the office above the charity shop was devastated. The roof had fallen in and anything that wasn’t destroyed by the fire was soaked through, smoke damaged, and open to the elements.

Despite the fire not reaching the rear building, it didn’t escape damage as smoke and water exposure made it unusable. We decamped to our Seaford office and tried to continue as normal as possible until we found new premises in Bell Lane, where we remain to this today.

With some forward planning and a lot of thinking on our feet we overcame the terrible problems the fire created. In 2012, our server room and filing room were above the charity shop and a lot of our paper files were destroyed. Those that weren’t burnt were severely damaged by smoke and water. We tried to have the files cleaned but that was largely unsuccessful, they were too badly damaged.

A week or two before the fire we purchased an extra computer, whose sole job was to back-up data held on the server at the end of every working day. Deliberately, we set up that computer in the rear building, as far away from the server room as possible, and hoped the system was robust enough to have survived any damage and that the back-up copy on its hard drive was still intact.

The day after the fire we were allowed into the building to rescue the computer which thankfully, was undamaged. We were able to access the backup copy. This allowed us to quickly reinstall the data in Seaford and get fully up and running so much quicker than we might otherwise have been able to.

As disaster recovery plans go, our system worked, and it worked well. We may have had some problems along the way, but it enabled us to survive the fire and it has given us the foundation to grow in the years since.

The plan was revisited with lessons learned from the fire and is regularly reviewed. It’s similar to an insurance policy, you hope you never need it, but you’d much rather have it in place five years too soon than five minutes too late.