A Walk Across The Rooftops 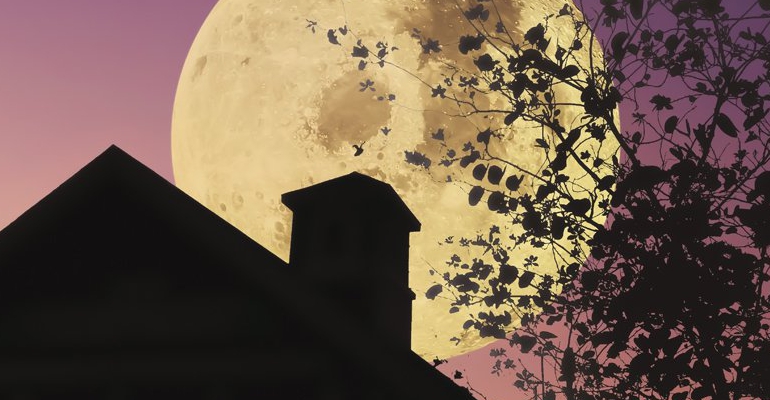 Most people don’t spare a thought for their chimney, how it came to be, how it came to work and how it might have been cleaned in years past. We asked Robert Veitch to smoke out a little history, and to make it interesting. You be the judge.

A chimney is known in the trade as an architectural ventilation structure. Its purpose is to remove airborne pollutants from buildings.

In centuries past, timber framed single room buildings of any reasonable size were known as hall houses. Residents, would eat, sleep, and socialise in one room. At the centre would be a hearth, an open log fire that was the solitary source of heating and the only place to cook. These buildings had a simple hole in the ceiling to enable smoke to exit.

Timber framed wattle and daub smoke hoods were an improvement but were not particularly efficient and rooms could become smoky. Ridding the room of smoke while keeping the heat inside led to the development of the chimney.

The Romans had shown innovation by embedding exhaust tubes into walls of their buildings, though it wasn’t until the 12th century before a similar structure was first introduced into domestic homes.

Early chimneys were simple affairs, timber-framed and covered with plaster or mud and by the 17th century they were commonplace. Wood gave way to stone and brick; by the end of the 19th century brick manufacturing was mechanised.

Building construction also progressed. Timber framed single room dwellings evolved into multi- roomed brick structures, with a fireplace in almost every room. But, it took more than a hollow brick tower to make the smoke go away. For that an efficient flue was needed.

The flue is the internal space within a chimney, linking the fireplace to the chimney pot. Its purpose is to draw or convey smoke and noxious gases out through the top of the building. The internal volume of a flue needs to be relative to the volume of the fireplace. 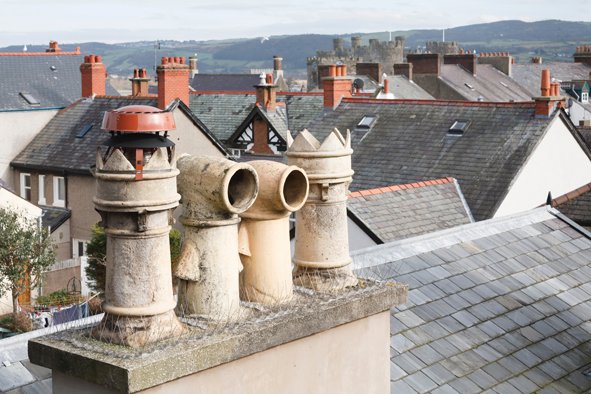 It was those wonderfully inventive Victorians who finally mastered the flue. Standard houses of the era had a fireplace of 18” (45cm) by 22” (56cm) with the flue containing an internal volume of 8” x 8” (20cm x 20cm). In percentage terms, 15% proved to be the most suitable ratio; this created the stack effect, which is upward airflow, consistently drawing pollutants and unwanted air upwards.

Traditionally, flues were lined with a material called parge to protect the brickwork and prevent gases escaping. Parge was a mix of sand, lime, animal hair and cow manure, all applied as a render. Parging stopped in 1965 when building regulations changed.

Initially clay replaced parge, but as building regulations became stricter, concrete and metal flues took over. For all new homes with a chimney, a flue lining is compulsory. In older homes flues linings can be retro fitted.

The Victorians had a fireplace in most rooms of the house and flues would be stacked within a tower. A series of flues within the same tower is a chimney stack. The divider between flues in a chimney stack is called a withe and could be as thin as half a brick.

Modest homes had pairs of chimney stacks that merged within the roof space. Grand homes like ‘Chequers’ had several chimney stacks. Atop the stack, atop each flue, was a chimney pot.

Chimney pots were developed to increase the height of the flue in a simple way without raising the roof height. Pots positively affected airflow and updraft from the fireplace. Not satisfied with mastering the flue, the Victorians also created the most beautiful ornate chimney pots to adorn their buildings. Chimney pots today are fairly routine functional tapered cylinders, but for the Victorians they could be round, square, many-sided or even sculpted; plain, decorated, or indulgent, they were statements for some well heeled folk. 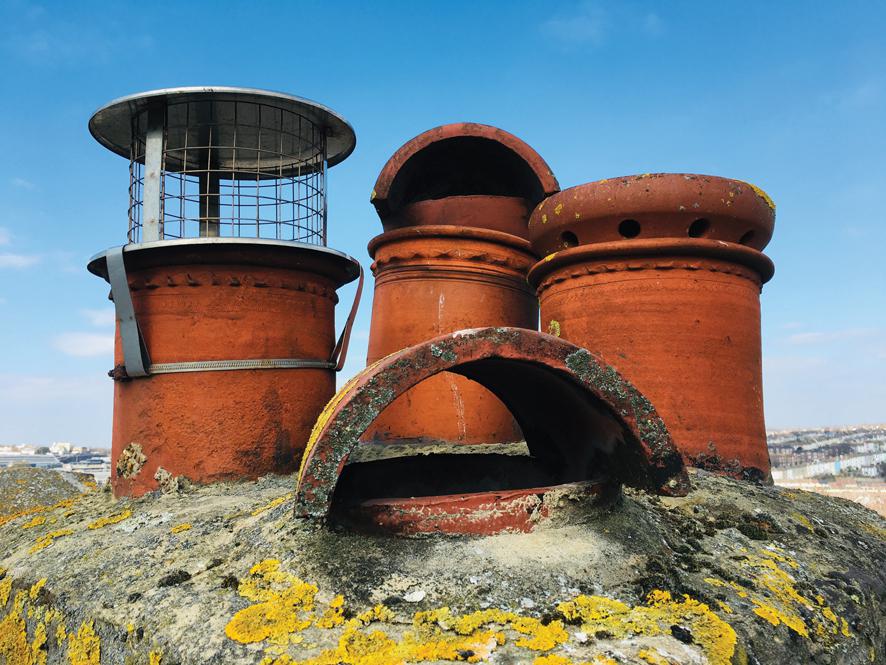 For many, the chimney pot wasn’t quite the summit as there was a need to go a whisker higher. To people of a certain age, mention the word cowl and they think X-Factor and a man with unusually high-waisted trousers. For those in the know, the cowl on a chimney pot is a device that increases updraft, reduces downdraft, acts as a rain guard, and prevents birds nesting inside the chimney pot.

Cowls are made of metal, clay, or both. Some spin, some are static, some are conical, some are half-pipes, some H-shaped, some even resemble a jousters helmet. Meshed cowls prevent birds entering the chimney and also function as spark arrestors, preventing burning debris entering the open skies. Cowls on oast houses were large and rotated with the breeze as the kiln beneath dried hops.

A walk across the rooftops of urban landscapes a couple of generations ago, would have witnessed a myriad of chimney pots emitting lines of rising smoke across the sky... A panorama reminiscent of the opening credits from the formative years of Coronation Street. Chimney maintenance remains as important now, as it was, way back when. By modern standards the lot of a Victorian chimney sweep was an appalling exercise in legalised slavery and general abuse.

Boys usually started at six years of age, suffering hideous conditions, sweeping the soot as they climbed unaided, up and down inside the flue. Sometimes a fire was lit to hurry them up; sometimes they became trapped in the stack. Sweeps became caked in carcinogenic soot. Few lived beyond middle age and many died of ‘chimney sweep cancer.’

The ‘Chimney Sweepers Act’ passed through Parliament in 1875 and effectively outlawed the use of child chimney sweeps.

A walk across the rooftops these days would witness smog free views, less smoke and cleaner air thanks to the ‘Clean Air Acts’ of 1956, 1968 and 1993. Sometimes, politicians do get it right! 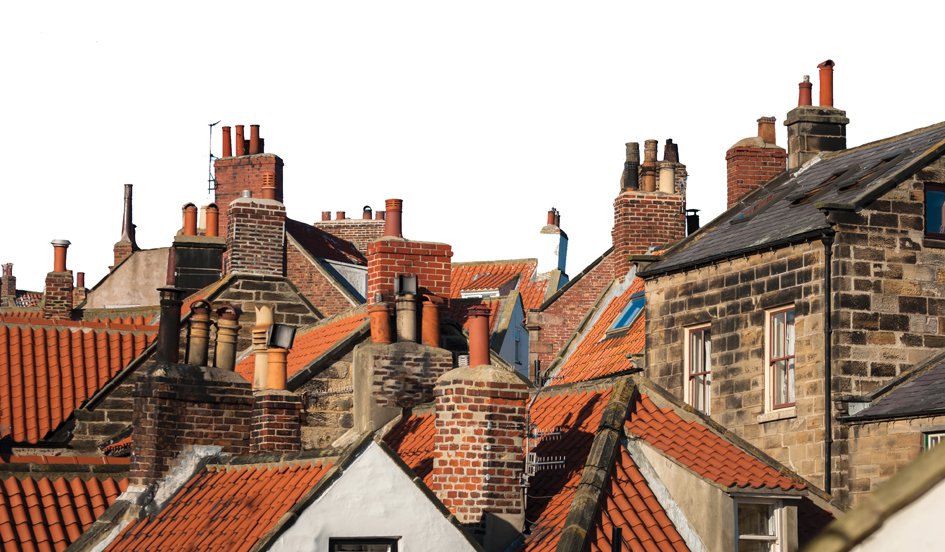