In Love With The Peruvian 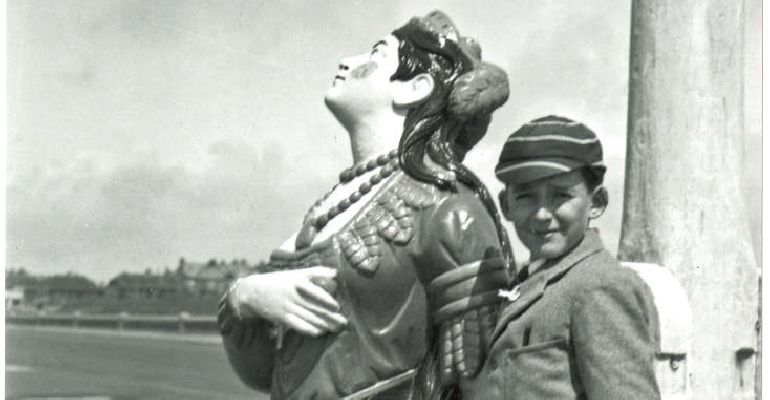 In times past figureheads personified the spirit of vessels and offered protection to the crew during their arduous maritime journeys; and one such figurehead has spent more than a century in Seaford writes Richard Hunter from the Hunter Figurehead Archives website

Ships figureheads have always held a particular fascination with the public, seen as exotic and mysterious, survivors of a once beautiful sailing ship. Sometimes the figurehead may be the only surviving fragment salvaged from a tragic wreck site, or more benign removed from a vessel after a full working life at the breakers yard, to be bought as a souvenir or memento. Either way we see and imagine within their painted eyes, a life of travel and adventure, storms and doldrums with no two voyages being the same.

The coast of Sussex has had its fair share of tragedies, with numerous fine sailing ships washed up ashore, dashed to pieces, while onlookers from shore scrambled to save the crew. Once the drama was over and as many of the crew saved as possible, the following days and weeks would see the debris washed ashore to be salvaged and re-used in a variety of ways, an early form of recycling long before it became fashionable.

An important, but purely decorative part of a ship’s fabric, the ship’s figurehead would also be salvaged whenever possible, although with little if any monetary value. This was seen as the spirit and character of the lost vessel, placed on shore it would serve as a reminder of a tragic event. If not protected from the harsh weather conditions on the coast, many of these wooden sentinels would unfortunately rot and decay away, and with them a link to an event in history lost forever.

We are fortunate that a few have survived the rigours of time, offering us a glimpse of a bygone age and art form. One such figurehead is that of the Danish Barque ‘Peruvian’ grounded off Seaford on February 8th, 1899. Originally built at the Clyde yard of D&W Henderson in 1874 for the Donaldson Line, by 1890 she had been bought by the Danish owners J Hansen of Fanø.

Her demise had been well documented in both the local and national newspapers of the time, giving a dramatic description of her loss, during the height of a gale as she was driven ashore between Newhaven and Seaford. The local Newhaven lifeboat, the ‘Michael Henry’ saved the captain and nine of her crew, while the chief and third mate, decided to stay on board. By the time the lifeboat returned to make a second attempt one of the mates had been drowned.

Over the next few days her condition changed dramatically; being full of water and her cargo now washing out onto the beach, through a hole 20 feet by 11 feet in her starboard bow. By the 12th February the heavy gale finished her off,  littering the beach with her debris. A number of early photographs have survived, showing onlookers standing on the shore spellbound at the unfurling tragedy. Within days the stricken vessel was pounded to pieces, her  valuable cargo spilling ashore.

Among the remains her figurehead washed ashore,  to be eagerly rescued; a beautiful rendition of a life size Peruvian female in a long flowing gown, holding in her left hand a feathered fan,  while her right arm is held across the chest, she looked as exotic a visitor as Seaford had seen in many years.

Since the old ‘Peruvian’ was salvaged from the wreck she has found her home in a number of locations around the town. Always on display,  it was inevitable that she would attract attention, offering a great opportunity for amateur photographers, with friends and family giving her a hug or kiss, figureheads can be very tactile – a perfect subject. 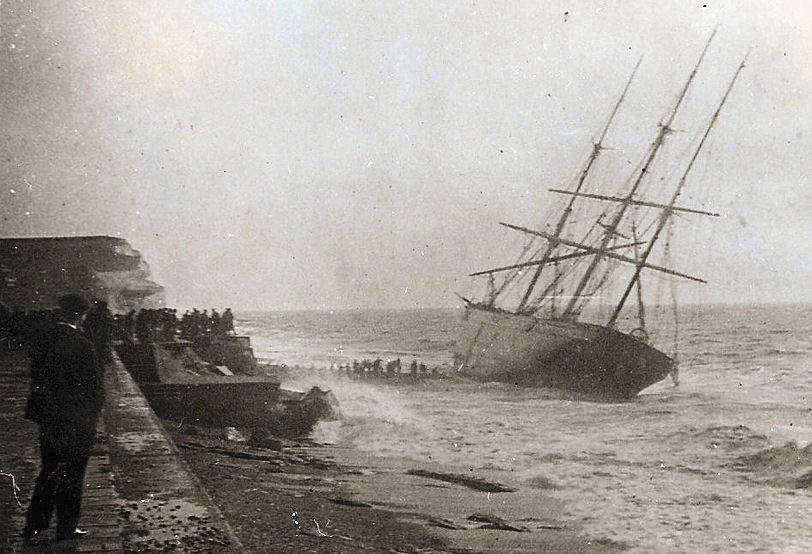 After the wreck, the ‘Peruvian’ figurehead was purchased by Major Thomas Crook, a well-established Seaford resident with a large house on the corner of Esplanade and Dane Road called Telesmaure, where she joined a number of other figureheads in his garden.

A photograph from the time shows Major Crook, in casual attire standing at  the side of the ‘Peruvian’, in the garden of Telesmaure House, giving her an affectionate kiss. It would be one of many she would receive over the years. It’s interesting to note that from this angle Major Crook is kissing the top of her head, which would suggest that at least a quarter of the figurehead was buried in the ground for stability.

By 1906 the Crook family had given the ‘Peruvian’ to the local council, who found a suitable home for her on the seafront. Another photograph shows the ‘Peruvian’ with a young male admirer, although it’s difficult to put an exact date on this particular view, it’s probably from the early 1920s. She appears to be standing at the side of the flagpole in The Salts Recreation Grounds, in front of the café. By this date she was beginning to show the signs of being outdoors in all kinds of weather without much protection and was very much in need of some serious tender loving care. It’s possible that on a number of occasions she was ‘refurbished’ and repainted.

Children have a particular fascination for figureheads of any kind, this can be seen in two photographs taken before World War II. One image shows two young sisters fascinated by this exotic female looking up to the sky. The other shows a young boy proudly posing in his school uniform, in a photo opportunity not to be missed!

One can only wonder about the countless photographs taken over the years and pasted into numerous family albums. Who knows how many more have survived showing the fascinating ‘Peruvian’ and her admirers? 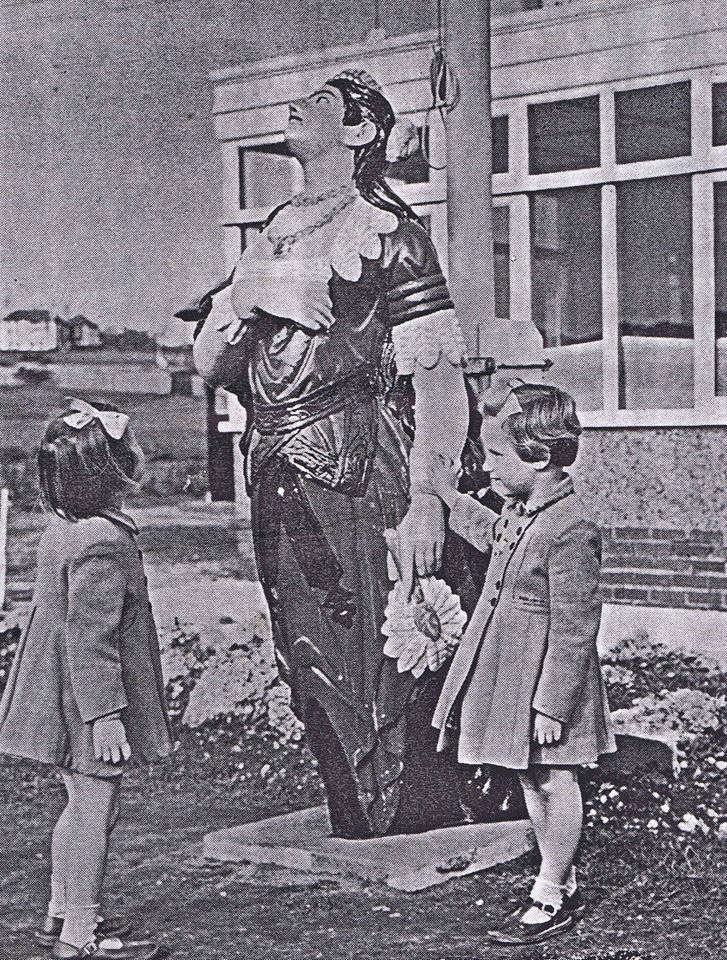 At some point in time the ‘Peruvian’ was moved to a location outside Chyngton Primary School but by the early 1970s she had been removed from the school and placed in council storage.

After looking for a new home for her, an ideal solution was found with the opening of the Seaford Museum & Heritage Society in 1979. Housed in Martello Tower number 74, together with other material from the wreck, the ‘Peruvian’ was an ideal exhibit, the largest  surviving fragment of a once magnificent sailing ship.

Unfortunately, the years had not been too kind to her fabric and by the time the museum had taken her in, she was in a desperate need of conservation and restoration. Thankfully a local man and museum volunteer named David Taylor was at hand and offered to restore her at his home in one of the Coastguard Cottages. It was a project that would take just over two years, and when finished in 1989 it would see her revived, looking as radiant and colourful as the day she was carved, over a hundred years previously. She remains on display in the museum’s entrance hall, offering visitors a glimpse of why everyone fell in love with the ‘Peruvian’.

We may never know the identity of the gifted craftsman who created this impressive figurehead, that’s a secret she holds close to her heart… 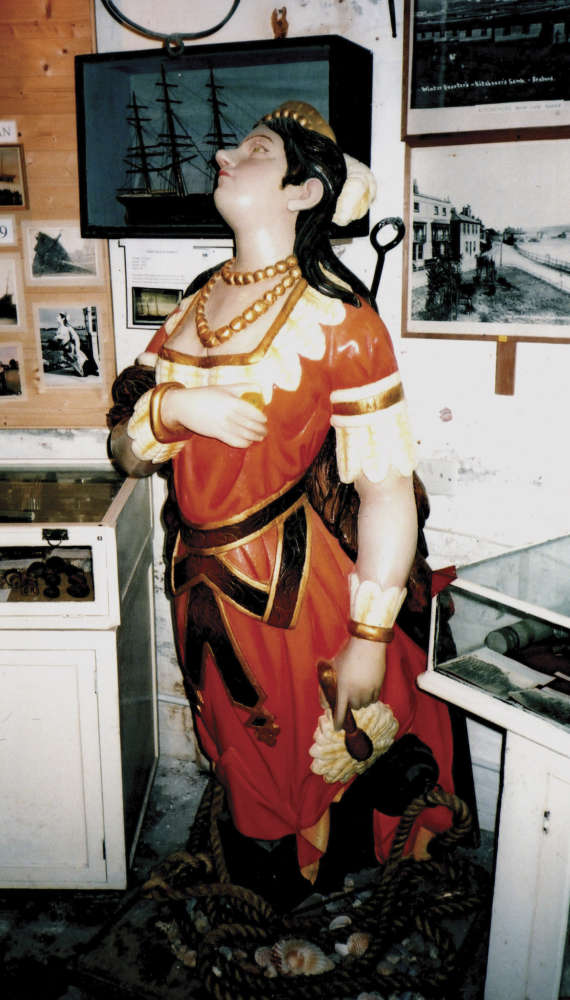