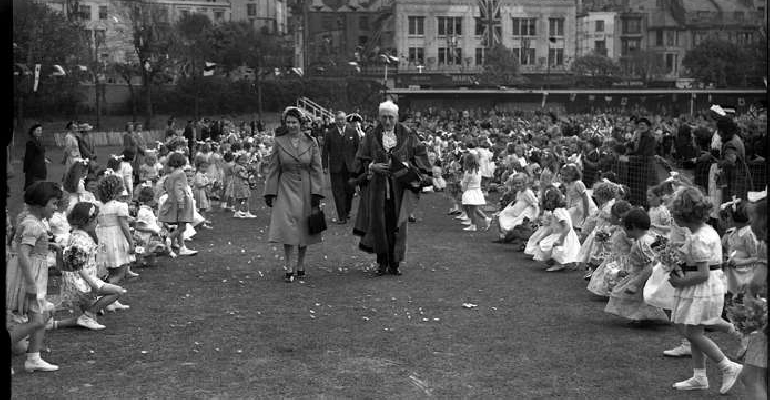 The Queen has lived through many changes during her seventy- year reign. Robert Veitch looks back through time and reports on some important, some less important, and some more local events that have happened during the Queen’s royal timeline

We continue with a selection of events that have occurred during the second half of The Queen's reign.

The first Comic Relief Red Nose Day takes place on 5th February and Horsham’s Harry Enfield makes his first appearance on Saturday Live as Stavros and Loadsamoney. The Queen returns to Gatwick Airport to open the North Terminal. Eddie the Eagle flies into last place at the Calgary Winter Olympics while Ben Johnson is disqualified from first place at the Seoul Summer Olympics.

On 5th February satellite television is beamed across the UK with the launch of Sky. Tim Berners-Lee ‘invents’ the world wide web while working in Switzerland. The wreck of the Bismarck, sunk in 1941 is located off the French coast. Laurence Olivier dies at home in Ashurst, near Steyning. On 9th November the fall of the Berlin Wall begins and by New Year’s Eve David Hasselhoff is performing an impromptu concert above it. 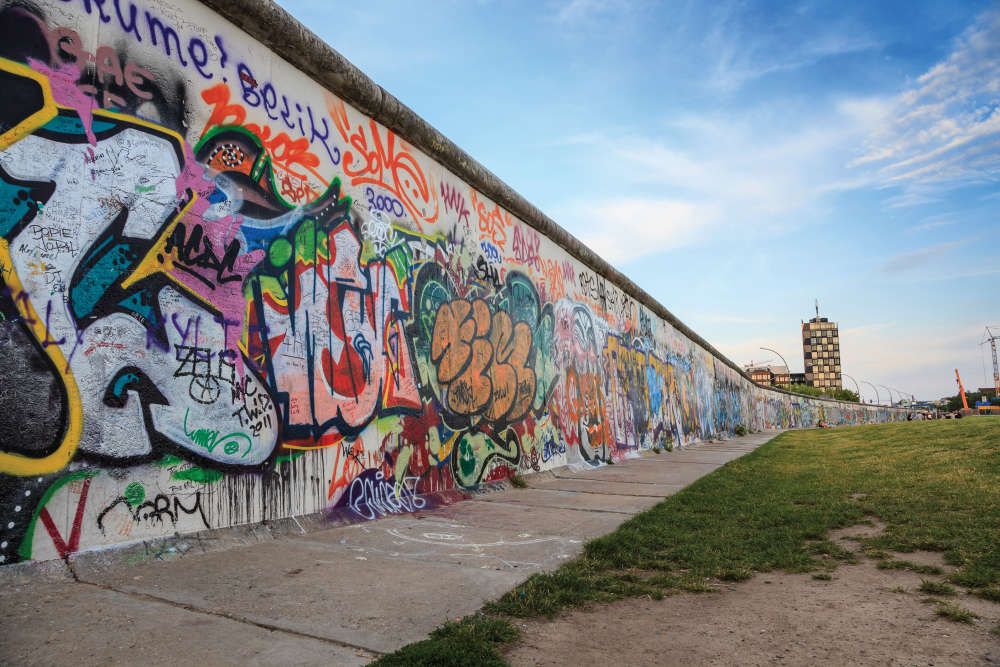 One Canada Square in Canary Wharf becomes Britain’s tallest building at 235m (770 feet). Bob Beamon's long jump world record is finally eclipsed by Mike Powell who leaps to 8.95m in Tokyo. Bryan Adams (Everything I Do) I Do It For You is number one for a record breaking 16 weeks and Bohemian Rhapsody becomes Christmas number one for a second time

The Sovereign Harbour opens in Eastbourne. The Maastricht Treaty takes effect turning the EEC into the European Union and UKIP is formed. The Queen opens Buckingham Palace to the public and Princess Diana withdraws from public life.

The Tour de France spends a day in the county, climbing the Col du Ditchling Beacon before finishing on Brighton seafront. The Labour Party leader, John Smith, dies at home from a heart attack, while in Gloucester excavations begin at 25 Cromwell Street. The laws on Sunday trading are relaxed, and on 19th November the first National Lottery draw takes place.

On 19th May the Channel Tunnel opens for business, while the best selling cars this year are the Escort, Fiesta and Mondeo. Rugby Union goes professional and on 2nd September Frank Bruno becomes WBC world heavyweight boxing champion at the fourth attempt. Princess Diana is interviewed by Martin Bashir for Panorama and OJ Simpson is found not guilty of double murder. 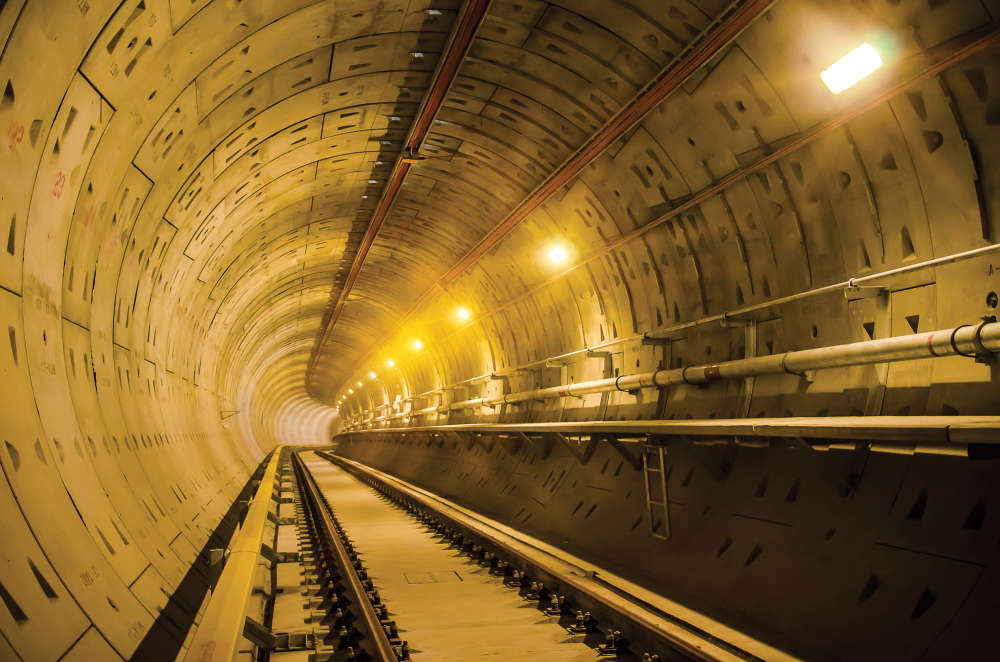 The divorces of Charles and Di, and Andrew and Fergie are completed, while in America Michael Jackson divorces Lisa Marie Presley. Dolly the sheep is cloned and born in Edinburgh. The Spice Girls release Wannabe, Take That split up, and the Nintendo 64 is released. Crawley’s Gareth Southgate misses ‘that penalty’ at Euro ‘96.

The final match at the Goldstone Ground results in a 1-0 win for Brighton, over Doncaster Rovers. Katrina and the Waves become the most recent UK winner of the Eurovision Song Contest with Love Shine a Light. On 27th June Harry Potter and the Philosopher's Stone is published. Princess Diana in killed in a Paris car crash on 31st August and HMS Britannia is decommissioned on 11th December.

Tony Blair states "A day like today is not a day for soundbites, really. But I feel the hand of history upon our shoulders,” hours before the Good Friday agreement on 10th April. Construction begins on the Millennium Dome and France host and win the World Cup, and 77 year-old John Glenn becomes the oldest person to fly in space.

On 27th March the Queen visits Durrington High School in Worthing and the following day she opens the Triangle Leisure Centre in Burgess Hill. The new Poohsticks Bridge opens on Ashdown Forest and Cliff Richard's Millennium Prayer becomes his most recent number one single. Boris Yeltsin resigns on New Year’s Eve, while later that day the Queen, not looking overly thrilled to be there, sees in the new millennium at the Dome. 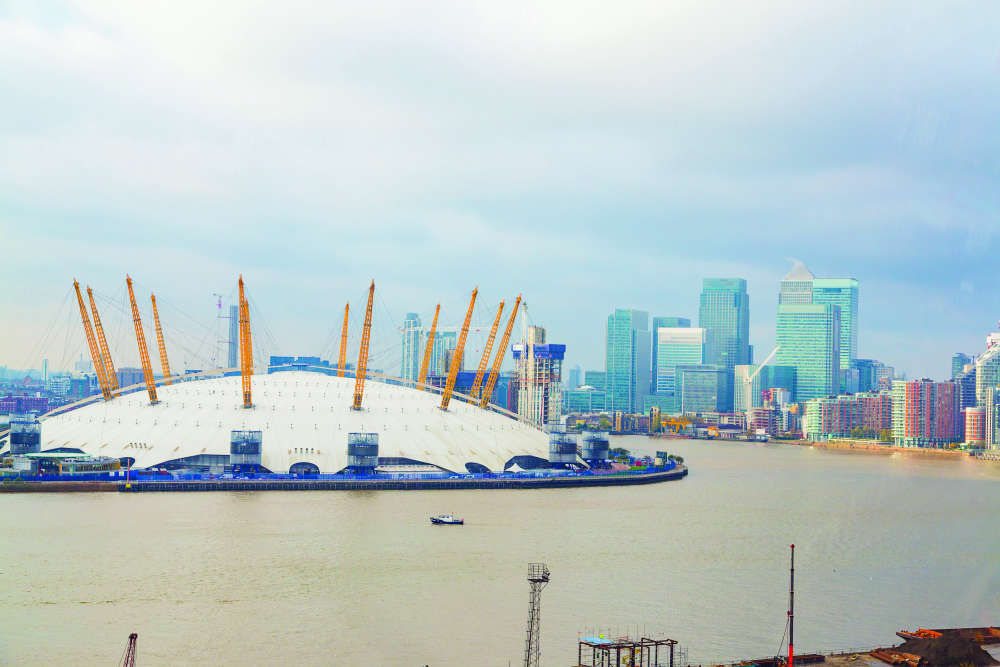 Queen Elizabeth the Queen Mother celebrates her 100th birthday. The Y2K bug, much feared before the millennium, turns out to be something of a damp squib. 600 people are evacuated as Lewes floods in October, while upstream in Uckfield 20 people have to be rescued from a flooded supermarket. Sarah Payne goes missing at Kingston Gorse and Wembley Stadium closes.

On 15th January Wikipedia is created and on 23rd October the iPod is launched. Donald Campbell’s body and the wreckage of Bluebird are recovered from Coniston Water. A stunned global audience watch the events of 9/11 unfold live on television.

Princess Margaret and the Queen Mother die within a month of each other. The Party at the Palace concert takes place in June and the Queen visits the Ardingly Show on her Golden Jubilee tour. The first episode of The Office airs on 9th July. Crowborough’s Piers Sellers rockets into space, aboard Space Shuttle Atlantis and there’s a new Norman invasion as Fat Boy Slim’s Big Beach Boutique II sees 250,000 descend on Brighton beach.

The search for weapons of mass destruction comes to an end and allied forces invade Iraq. Sussex County Cricket Club win their first County Championship after 164 years of trying. England win the Rugby World Cup, against Australia, in Australia. And on 24th October the future flies into history as Concorde makes its final commercial flight.

The Queen opens the Scottish Parliament building at Holyrood. Mark Zuckerberg creates The Facebook. Battle based band, Keane, release Hopes and Fears, which becomes the second best-selling album of the year. On 6th July Arundel is granted Fairtrade status and one night on Bexhill-on-Sea beach an amateur paleontologist discovers fossilised Iguanadon brain tissue.

On 26th March Former Prime Minister, James Callaghan, dies at home in Ringmer. Prince Charles marries the girl from Plumpton, Camilla Parker Bowles on 9th April. The Airbus A380 makes it's maiden flight. June sees publication of the first issue of South Downs Living magazine. On 2nd July, Live 8 takes place in Hyde Park, and after 19 years and at the 9th attempt, England regain The Ashes. 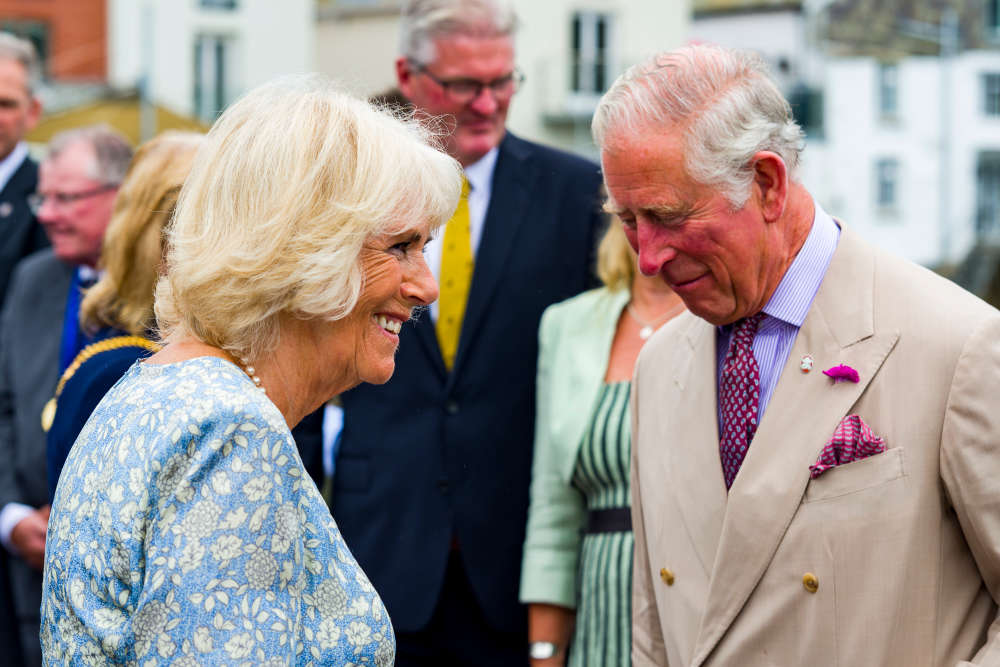 Sussex County Cricket Club win the equivalent of the league and cup double. The Queen celebrates her 80th birthday at Windsor Castle. Helen Mirren stars in The Queen and Gnarls Barkley’s Crazy is the biggest selling single of the year. Elsewhere, Google purchases YouTube and a northern bottlenose whale is found swimming in the River Thames.

In March the Queen visits the Jubilee Library and Theatre Royal in Brighton, enjoys lunch at Brighton Racecourse and heads to Whitehawk; and on April 21st she becomes the eldest ever British monarch. Sussex Day is celebrated for the first time on 16th June and Newick’s Piers Morgan makes his first appearance on Britain’s Got Talent.

There are queues in the streets as Northern Rock goes into meltdown. Construction work on the Olympic Stadium begins and the 26km circumference of the Large Hadron Collider becomes operational. Elsewhere, Lewis Hamilton wins his first F1 title and Danny Boyle releases Slumdog Millionaire.

On 29th December, the Queen becomes a great grandmother when Peter Phillip’s wife, Autumn, gives birth to Savannah. Volcanic ash from Eyjafjallajökull creates havoc for airlines. The South Downs National Park is created. In November South Downs Living magazine rebrands as Sussex Living and heavy snow falls across the county in the run up to Christmas.

Prince William marries Kate Middleton at Westminster Abbey on 29th April, then on the 2nd May, the Queen becomes the second longest reigning British monarch in history. The Flag of Sussex is registered at the Flag Institute and Crawley Town Football Club are promoted to the Football League. 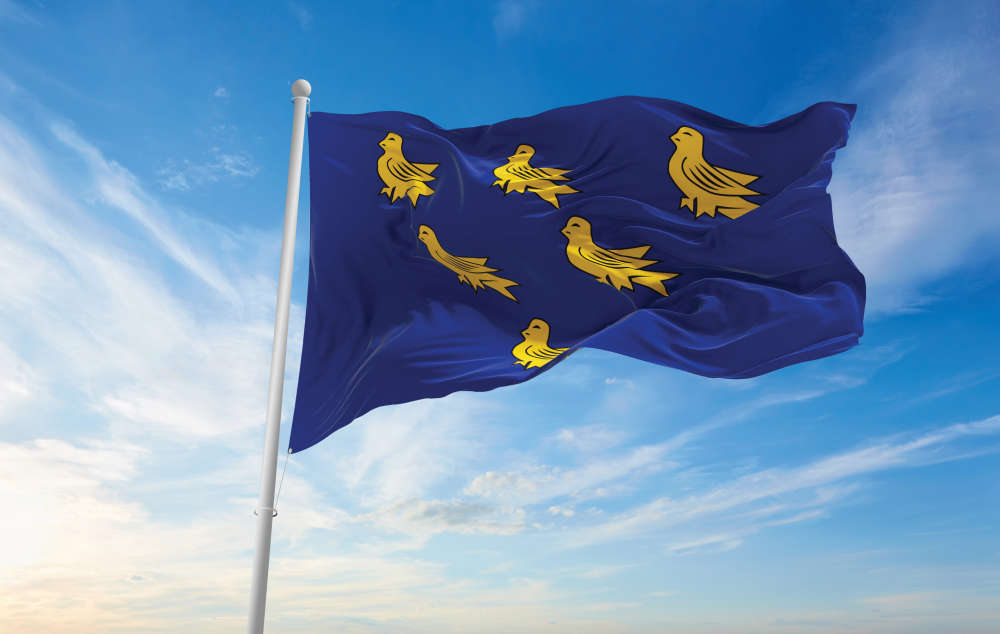 The Queen appears at the London 2012 Olympic opening ceremony with James Bond. Crawley’s Romesh Ranganathan gives up teaching for stand-up comedy. At 309m (1,016) The Shard becomes the tallest building in Europe. Ceefax comes to an end after 38 years of gradual intermittent scrolling. West Wittering’s Keith Richards, along with the Rolling Stones, undertakes the 50 & Counting Tour.

On January 7th Selsey’s Patrick Moore posthumously presents his final The Sky at Night. Prince George is born on 22nd July. The Queen opens The Keep, the new East Sussex Record Office in Falmer on 31st October and also visits Lewes, Newhaven and the refurbished Southease Youth Hostel. And… after 77 years, Andy Murray becomes the first British winner of the men’s singles at Wimbledon since Fred Perry.

After 34 years, Sir Terry Wogan hosts his final Children in Need campaign. Scotland votes 'No' to independence. Malaysia Airlines Flight 370 goes missing and is yet to be found. Ed Sheeran scoops his first number one single with Sing and The Battle Of The Five Armies is the last film in Peter Jackson's second Tolkien trilogy.

On 9th September Queen Elizabeth usurps Queen Victoria becoming the longest reigning British monarch. Chichester’s Tim Peake launches from Kazakhstan for a six-month stint on the International Space Station. The Shoreham Air Crash kills 11 people. The Fiesta, Corsa and Focus are the best-selling cars of the year and Hollywood A-lister Cate Blanchett moves to the outskirts of Crowborough.

During November, the Queen visited the Chichester Festival as she celebrates her Sapphire Jubilee. Global singing sensation Adele moves to a house near Turners Hill. The Mousetrap enters the 65th continuous year of its initial run. Gatwick based Monarch Airlines goes into administration and Donald Trump is sworn in as the 45th President of the United States.

The Rampion wind farm becomes operational off the south coast. The big freeze in March evolves into the long hot summer by late April. Harry and Meghan marry in May and become titled the Duke and Duchess of Sussex. England suffer World Cup semi-final defeat at the hands of Croatia. In April Magnet and Sussex Living merge to produce the magazine we have today and LadBaby has the first of four consecutive Christmas number one singles.

In Vienna on 12th October, the Kenyan, Eliud Kipchoge clocks 1:59:40 to became the first human to run a marathon in under two hours. Tiger Woods wins his 15th golfing major, The Masters, 11 years after his 14th success. Global singing sensation Adele sells her house near Turners Hill. Star Wars Episode IX - The Rise of Skywalker brings to an end the 42 year-old lineal Star Wars franchise.

On April 9th, the Queen loses her husband of 73 years, Prince Philip, aged 99 years and ten months. On 18th September the Queen becomes a great grandmother for the twelfth time when Princess Beatrice gives birth to Sienna Daniel Craig stars as James Bond in the 25th film in the series No Time To Die. Emma Raducanu wins the US Open without dropping a set and becomes the 68th BBC Sports Personality of the Year and England lose on penalties to Italy in the final of Euro 2020.

On 6th February, the Queen marks 70 years as the monarch. The iPod is discontinued on 22nd May. Jemma Melvin’s lemon Swiss roll & Amaretti trifle is named ‘Platinum Pudding’ and quickly becomes the dessert to be seen serving at Jubilee street parties. The last episode of Neighbours will air on 1st August… and the Queen lives on…

Should the Queen still be with us on 26th May 2024 she will become the longest reigning monarch in history, usurping Louis XIV of France, which will not only further validate the ‘long to reign over us’ line of the national anthem, but also seems like a good reason for another extended Bank Holiday! 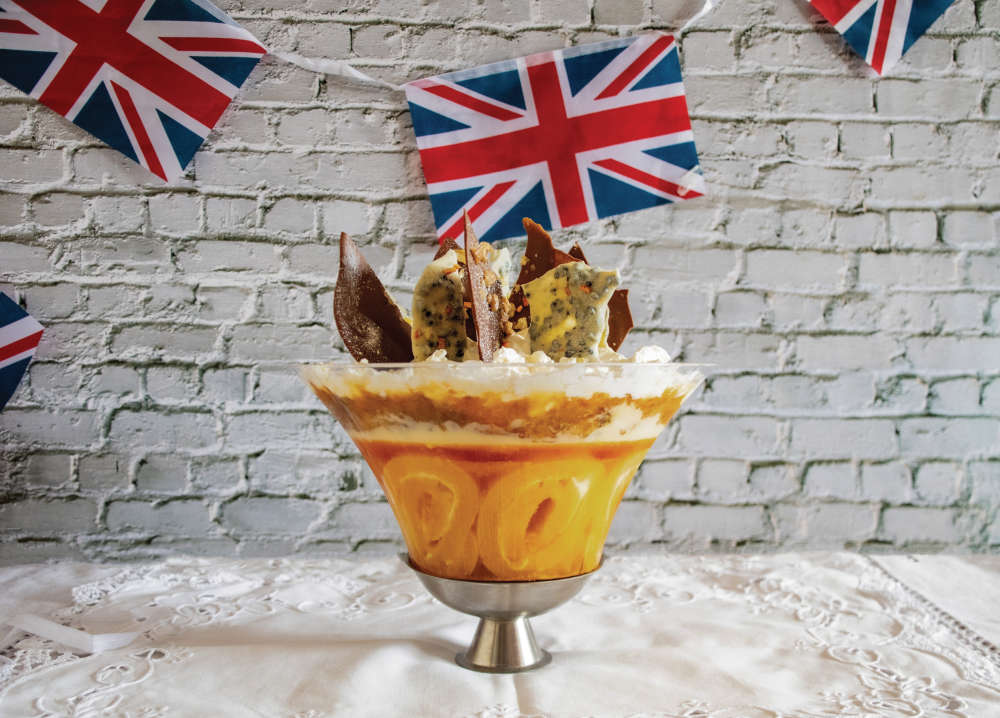