It's a Dog's Life: Teddy in Lockdown 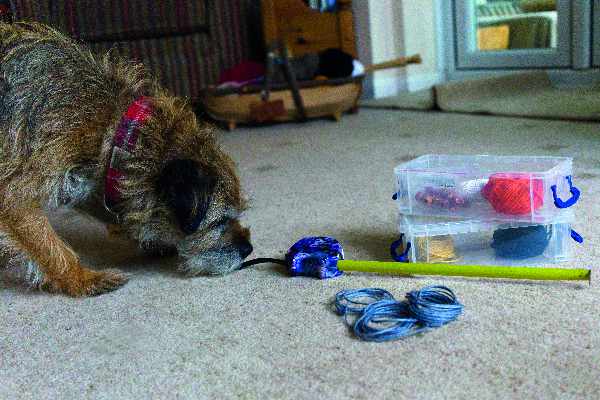 Teddy may be starting to look like a Wookiee on a bad hair day, but it hasn’t stopped him from staying positive during lockdown. His human interpreter writes his account of life at home and the reality of spending more time with ‘Them Indoors’.

Now, I know this COVID-19 is very serious, but I’ve got to be honest: for a dog with separation anxiety, there has been some positives to the situation.

For starters, ‘Them Indoors’ have both been at home 24/7, and walking the dog suddenly took on a certain gravitas as the ‘allowed’ exercising activity.

As I’m not terribly good with other dogs, social distancing really hasn’t been an issue, although ‘Her Indoors’ long chats with other villagers have been a bit trying; I’ve learnt to lie down comfortably if it looks like things are going on a bit.

I suspect that the government might have had some canine input into policy-making as pet shops have been allowed to remain open for our food, but vets for routine appointments and groomers have been shut.

As a result, I’m beginning to look like a Wookiee on a bad hair day, but then that’s nothing compared to ‘Her Indoors’…

Then there’s been the working situation.

‘Him Indoors’ has been furloughed but ‘Her Indoors’ has moved some of her courses online so I’ve had to adapt.

The secret to virtual meetings is to remain hidden, so that the other attendees don’t know there is a dog present, and then bark, ideally suddenly and sharply with no provocation or warning.

It’s gratifying to see them all jump on those little pictures on the screen.

‘Her Indoors’ has got better at muting and unmuting her microphone, so I’ve had to work hard on my timing, but I have built up a certain level of expertise.

Then there have been the lockdown activities, a large number of which have, rather gratifyingly, concerned the garden, giving me the opportunity to instruct old fluffy woofy, the Leonburger next door, in the art of social distancing through the fence.

I must say that the garden has never looked so good.

Then there has been the home crafting.

‘Her Indoors’ decided to make a fly curtain for her office out of macramé, which has involved endless hours of her sitting on the floor and knotting bits of string in intricate ways.

Whatever makes her happy I guess.

Still, I’ve learnt that balls of string are good fun to unravel, beads have a nice piquant crunch and that you cannot trust a retractable tape measure.

Clapping for the NHS and other frontline workers has been good, and the villagers have turned out in their droves to demonstrate their appreciation.

As we live on a main road, we have had the occasional well-timed ambulance drive past, so we’ve been able to thank them directly, which has been a really rather special moment.

As lockdown measures continue to ease, I’m looking forward to seeing family and friends again, but I’m also planning a bit of a rest.

I feel I’ve played my part and supervising all this activity on the home front has been exhausting.

Time for a nap.