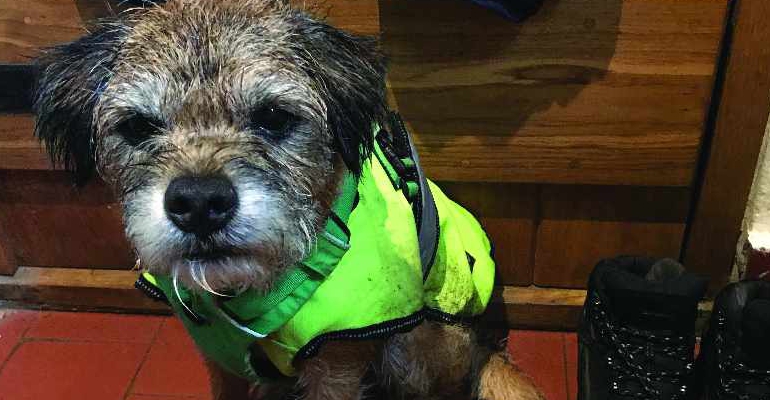 Autumn’s well and truly arrived, and Teddy, along with his interpreter, are steeling themselves for the rainy days to come

It’s been an interesting year for many significant reasons, but the weather has also played its part.

After a winter that had ‘Them Indoors’ planning an ark, we had a sunny spring and a summer that has, occasionally, forced a retreat to the shade for consumption of copious quantities of liquid refreshment and something from the barbeque –  for ‘Them Indoors’ as well as me.

However, as a fellow dog walker remarked the other day when we sloshed passed them in rainy weather that was less ‘mists and mellow fruitfulness’ and more ‘downpour and dreary dampness’, “That’ll be it until April then…” I do hope not.

It has to be said that I’m not a keen walker at the best of times. Other dogs may work themselves up to an excited frenzy at the sight of their lead, but I retreat miserably to my bed and have to be coaxed out with treats.

Why would I want to go out for a walk in dubious weather when I could be lounging in comfort on my own hearth? There are some dog owners who subscribe to the view that you shouldn’t walk your dog in inclement weather.

However, as I will only attend to one of the necessary businesses of walking when I’m not in my own garden, out I have to go in order to go, if you follow my meaning.

The Irish have the expression that there’s no such thing as bad weather, just the wrong clothes, and that’s a view ‘Her Indoors’ tends to subscribe to. She has a proper weatherproof anorak with a zip-in fleecy lining and a hood, waterproof trousers, walking boots and a range of gloves.

Very attractive she looks too! Us dogs, however, are a bit more limited in our attire: it’s fur, long, short, or in between, depending where I am in the grooming cycle.

‘Her Indoors’ does occasionally add to my indignities with a coat to protect me from the worst of the rain so that I don’t have to spend hours confined to the kitchen drying off.

It previously belonged to my predecessor, the Boss, and it’s fluorescent. I look like I need the matching hard-hat and steel toecaps.  I’ve tried passive resistance; it’s difficult to put a coat on a dog who refuses to get up, but ‘Her Indoors’ is remarkably persistent, positively terrier-like
in fact.

Still, I get my own back in the icy weather. We usually walk down small, country lanes that don’t get gritted, so they can be dicey if the temperature drops below freezing.

I have a significant advantage as I’ve got four-wheel drive and a low centre of gravity, but ‘Her Indoors’ is tall and totters around on two legs. In spite of her best efforts, she does occasionally slip, and I’ve noticed on those occasions, that it’s usually, in some bizarre way, my fault.

I just see it as payback time for forcing me out in the first place, whatever the weather!