It's A Dog's Life: Showtime 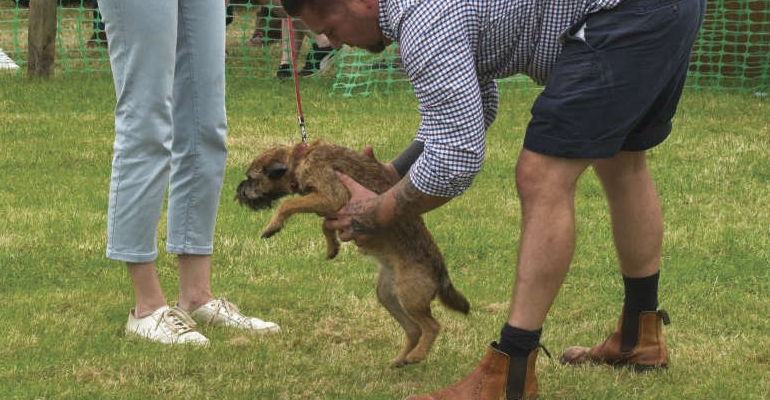 This month it’s showtime for young Bear, who is more than happy to be the centre of attention, as Teddy explains through his human translator Helen Stockton

One of the advantages to having an apprentice is that you don’t have to do everything yourself. We were recently invited to a local agricultural show, to grace the Working Terrier group with our presence. Now I don’t particularly like crowds, they stress me out, but the apprentice, Bear, is the perfect fur for such a venture. She loves people and has only just stopped widdling with excitement when they fuss her, and she is similarly keen on meeting other dogs. She is also very investigative. ‘Them Indoors’ have nicknamed her ‘Dora the Explorer’ as she has always got her little nose stuck into something. So what better than to deploy Bear, as a roving reporter, whilst I chilled out at our friends, Ann and Peter’s house, for the day.

Bear was duly entered for the 6 to 12 months puppy class, and passed the time waiting for her big moment, trying to chew her way through the plastic fencing marking out the show ring. When it was her turn, she played with the Border Terrier puppy next to her, shamelessly rolling on the ground, and payed no attention to the judge or standing nicely. Needless to say, she didn’t win one of those ribbony things that people seem to covet so much. Which brings me on to a bit of an observation. Why is it at dog shows, when the furs are the centre of attention, that the prizes are not for them? Rosettes, whatever the colour, might provide a bit of dietary fibre but little else. I suggest a big bag of top-quality dog biscuits for the winner, diminishing in size for second, third and fourth. If the people want rosettes, they can have their own show and trot around the ring for them. Still, Bear had a great time and enjoyed meeting all the different terriers. Apparently, the Lakeland and Fell Terriers were the noisiest, quite an accolade!

Bear also did a thorough exploration of the entire showground and if you were there with a dog and weren’t greeted by a small and over-enthusiastic Border Terrier, you were in the minority. She even met two Sussex Spaniels, Rupert and Charlie. This is a breed that ‘Her Indoors’ has always wanted to meet but, as they are on the vulnerable breed list, there are not many about. They are lovely dogs and a proud canine bearer of the Sussex appellation. Bear also said hello to cows, pigs and sheep, watched show-jumping and vintage tractors. She even managed to snaffle a piece of sausage from ‘Him Indoors’. And best of all, when we returned home from our various activities, she slept for the whole evening. Hardly surprising, she is a working terrier after all!