It's A Dog's Life: Redecorating 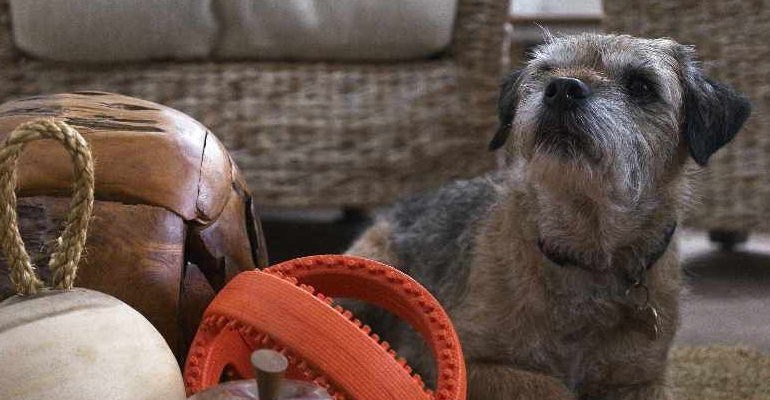 January may not be an indoor month for everyone, but for Teddy it’s time to contemplate redecoration and the battle for control of the soft furnishings. As usual, his barks and yelps are translated into human by Helen Stockton

The winter is the season for interiors. There are a number of reasons for this but primarily it must be because we spend so much of it indoors. And I don’t know what goes on in your household, but in ours, it’s not so much spring cleaning as winter cleaning. With the garden safely doing its own thing in the frost and the rain and the snow, the attentions of ‘Her Indoors’ are redirected to the inside.

She’s trying to persuade ‘Him Indoors’ to do a bit of decorating. When they moved into our present house fifteen years ago, he decorated throughout and now looks all pained at the idea that he might be expected to do it again. I’m happy to help; a paw-print here, a tactical shaking of muddy droplets there, but she doesn’t seem keen strangely enough.

She’s always reading about interiors in this magazine and in those specialist interior magazines, which is a dubious pastime if you ask me. I’ve noticed they often have a well-groomed pooch gracing one of their equally well-groomed rooms, but white walls, Scandi minimalism and high polished kitchen floors don’t work quite so well with muddy feet and tumble-weed fur balls blowing along the skirting. And to my mind tasteful accessorising is not a few scatter cushions or a throw, unless it’s there for the dog of the household to lounge on; but a carefully placed rubber toy in a strongly contrasting shade, so we can find it easily, and a rug with just the right degree of abrasiveness for scratching my beardage on.

Sometimes there is a little bit of conflict over the ornamentation of the living space. ‘Her Indoors’ decided that a tasteful collection of three large wooden balls was just the thing in the living room but as one of them has a rope handle, like an oversized Christmas bauble, I mistook this for a tuggy toy and got into trouble. Not my fault whichever way you look at it.

She also has strange notions about not having me on the furniture which is a bit unfair as I was allowed to go wherever I wanted in my previous home. I’ve abandoned the sofa with reasonably good grace, but I still keep trying for their bed regardless of the scolding. ‘Junior Her’ has got a beanbag in her old room, and as there hasn’t been a collective decision about whether this is furniture or not: a grey area or is that ‘sea mist’ or ‘winter silver’, I have taken advantage and claimed it as my own.

Anyway, hasn’t ‘Her Indoors’ heard of the old adage about British interior design and the tendency to choose colours, for major soft furnishing items, that match their dogs? Border Terrier beige anyone?